Bigg Boss 11: Bandgi Kalra's boyfriend BREAKS UP with her after she gets close to Puneesh Sharma inside the house

Bandgi's boyfriend is clearly done with her

Even though Bigg Boss is incomplete without two contestants claiming to be in love with each other, we didn’t really expect to see romance this year. That's because we got to witness so much drama in the first week that we thought that this season of the high voltage reality show will be all about the war of words. But then we were proved wrong as Bandgi Kalra and Puneesh Sharma started getting all touchy with each other. Initially, they both admitted that all this coochie-cooing is just for the cameras, but in the last few episodes, the romance between them has started to feel real. In fact, in last night's episode of Bigg Boss 11, Puneesh, who is already going through a divorce went on to admit that he is starting to fall in love with Bandgi, who is scared about the repercussions. She obviously knows that her boyfriend, Dennis Nagpal is upset with her, but what she doesn't really know is that Dennis is done with her. Also Read - Bigg Boss 11 contestant Bandgi Kalra rocks THIS striped monokini in Goa — view pics

For those of you who don't know, Dennis is a TV producer and director. He hails from Delhi and also happens to be Puneesh’s friend. As soon as Bandgi and Puneesh started getting close to each other, Dennis made his displeasure evident with the kind of tweets that he has been sending out from his Twitter account. But his recent story on Instagram has made it pretty clear that he has broken up with her. In fact, he has deleted all the pictures with Bandgi from his Instagram account. Check out the screenshot of Dennis' Instagram story right here: ALSO READ: Bigg Boss 11: Bandgi Kalra’s boyfriend upset with her closeness to Puneesh Sharma? Also Read - Bigg Boss 14: Devoleena Bhattacharjee, Kamya Panjabi, Bandgi Kalra come out in praise of Rakhi Sawant — read tweets 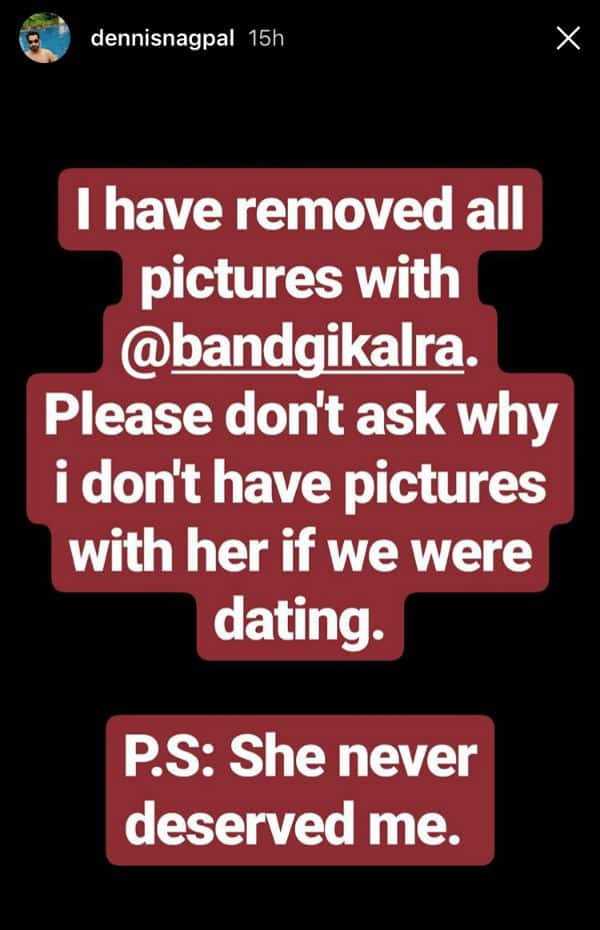 Well, we don’t know what will happen when Bandgi finally exits the house. Puneesh promised to her that he will handle it all, we just hope he keeps up his word.

What are your thoughts on this? Let us know in the comments below and keep watching this space for all the latest updates on Bigg Boss 11.