Did the show runners rig the votes to save Hina Khan, Priyank Sharma and Shilpa Shinde?

Viewers of Bigg Boss 11 were surprised when four strong contestants landed in the danger zone last week. Sapna Choudhary, Shilpa Shinde, Hina Khan and Priyank Sharma were nominated, and over the weekend, Salman Khan announced that Sapna received the least number of votes and hence she bid adieu to the Bigg Boss house in a dramatic elimination. You see, Shilpa Shinde was declared safe during the Saturday episode. So the decision was to be taken between Priyank, Hina and Sapna. On Sunday's episode, all three of them were sent in a circular rotating chamber that was placed in the garden area. The other housemates were made to sit there. The one who didn't come out of the chamber would be eliminated. As the platform stopped moving, Hina and Priyank were still in the chamber, and Sapna was not. Also Read - Trending TV News Today: Reports of Indraneil Sengupta and Barkha Bisht living separately, Eijaz Khan, Arshi Khan on Bigg Boss 15 moving to OTT and more

Of course, the fans were shocked and so were the housemates. We too couldn't digest the fact that Sapna has been eliminated from Bigg Boss 11. The thing is that the lady enjoys a massive fan following in major parts of North India. In fact, we had told you how her supporters were running ads in every newspaper of Haryana urging people to vote for her. So it was hard to believe that she received the least number of votes. ALSO READ: Bigg Boss 11: Luv Tyagi and Vikas Gupta get into a nasty argument, over a muesli box and Hina Khan Also Read - Silsila Sidnaaz Ka promo: Sidharth Shukla and Shehnaaz Gill’s cute moments will make you want to re-watch Bigg Boss 13 all over again

And now to add more stock to the tale, Amar Ujala has reported that Sapna in fact got more votes than Shilpa, Priyank and Hina. They further suggest that the call of elimination this week was taken on the basis of content and not the votes. They have shared a screen shot of the number of votes that all the four contestants receieved. Check it out right here: Also Read - Throwback Thursday: From Rubina Dilaik to Asim Riaz – 5 Bigg Boss contestants who kept screaming throughout the seasons 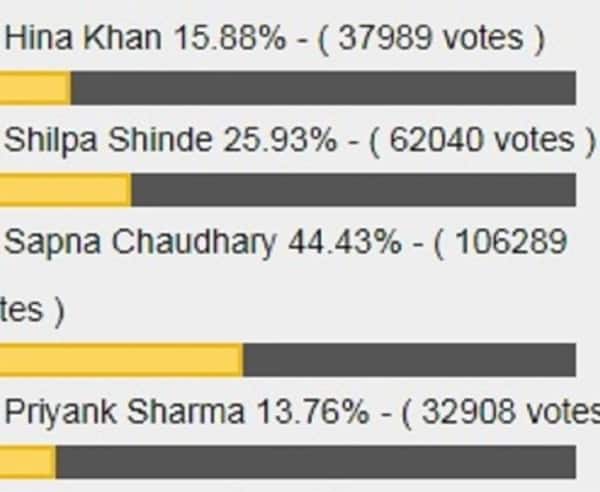 Of course, we cannot verify the authenticity of this result. But the fact that Sapna is out of the house despite the strong campaign that was run outside is a bit unsettling, no? Even we carried a poll asking our readers that who should be eliminated from Bigg Boss 11, and there was a tie between Hina and Priyank.

Anyway, this is not the first time that the elimination has been on the basis of content and not the votes. In previous seasons too, there were stories about how the show runners call the shots when it comes to elimination.

What are your thoughts on Sapna's elimination? Let us know in the comments below and keep watching this space for all the latest updates on Bigg Boss 11.