Bigg Boss 11: Hina Khan is mighty pissed with beau Rocky Jaiswal and the reason will surprise you

It's less than three weeks to go for the grand finale of Bigg Boss 11 and the show runners are making sure to grab more eyeballs in the last few days of the show. The family members of the contestants set foot inside the house yet again, but this time they spent a couple of days in the padosi house, away from the housemates. Puneesh Sharma's girlfriend and co-contestant, Bandgi Kalra re-entered the house along with Vikas Gupta, Akash Dadlani, Priyank Sharma and Luv Tyagi's mothers, Shilpa Shinde's brother and Hina Khan's boyfriend, Rocky Jaiswal. We saw how Hina started screaming the moment she saw her significant other on the TV in the living area, as that's the only thing that connects the contestants and their loved ones. Also Read - Trending OTT News Today: Emmy 2021 winners, Taapsee Pannu's Rashmi Rocket release date, Divya Agarwal showers praise on Varun Sood's family and more

But there is one thing that is bothering Hina about Rocky. So much that she is mighty pissed with him. In one of the videos published under BB Extra Dose category on Voot, we can see her in conversation with Luv Tyagi wherein she tells him that she is very angry on Ro (as she likes to call him), because he repeated his attire on national television. Remember, Rocky had entered the house for a brief period of time few weeks back, and he wore a leather jacket. Turns out he wore the same jacket again this time too, and this has not gone down well with Hina, who tells Luv that Rocky has so many jackets, yet he decided to wear the same jacket. ALSO READ: Bigg Boss 11: Hina Khan is already crying thinking about Luv Tyagi’s elimination Also Read - Bigg Boss OTT WINNER Divya Agarwal celebrates her victory with beau Varun Sood and 'bhai' Rannvijay Singha – watch videos

Well, we went back to check and it's not the same jacket. This is what Rocky wore when he came to the house first time. But maybe Hina is talking about Rocky's second day in the padosi house, which will be aired tonight. Also Read - Bigg Boss OTT GRAND FINALE Live Updates: Divya Agarwal wins the show 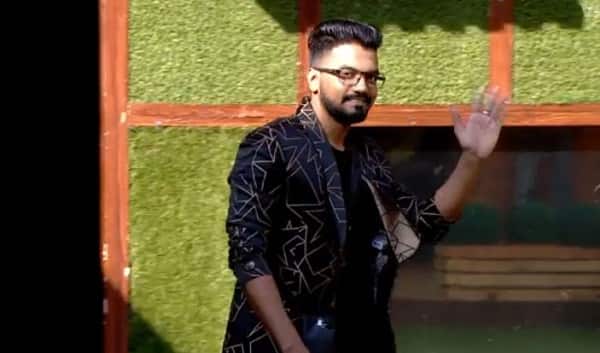 Luv tells her that he is getting "fried" in this house, and she gets a bit upset. Luv manages to convince her and asks her what should he wear. Hina tells him not to wear the checkered shirt as it doesn't suit him, and instead wear a white shirt. Luv tells her that it's all dirty and has marks of foundation cream on the collar. He doesn't listen to her and she walks away saying, "itna footage main nahi deti kisiko."

Coming back to Hina being angry on Rocky, we are with her. Who repeats his clothes on national television?