Bigg Boss 12, 27 September 2018 LIVE Updates: Sreesanth gets into a fight with Nirmal-Romil; wants to leave the house 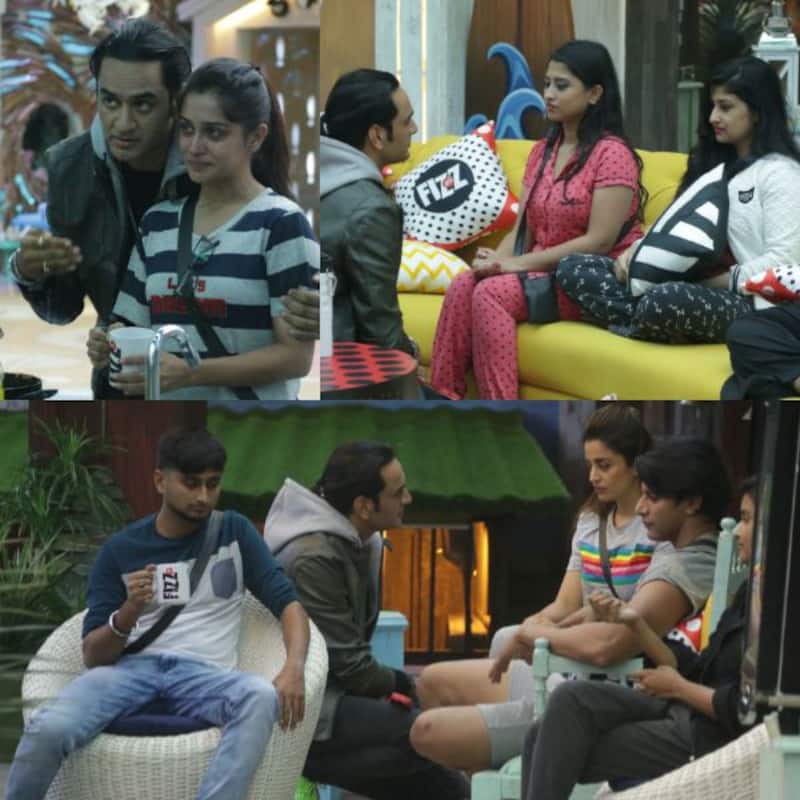 Dipika shares how Somi and Saba were scared when Srishty started sleepwalking. Srishty says if nobody brought her back to her bed she would come in her own as she knows where everybody goes. Also Read - Shoaib Ibrahim and Dipika Kakar introduce sister Saba's to-be-husband; drop deets about their romance, upcoming wedding

Jasleen shares how she gets a negative vibe from Dipika Kakar. Anup asks Jasleen to go and talk to Dipika but Jasleen is not ready at first but later agrees to go and make an effort.

Romil, Nirmal and Sourabh discuss Kriti and Jasleen's makeup. Jasleen asks Anup how is her makeup. Romil tries to pull Jasleen's legs and a fun moment is created. Anup also joins in this fun. Nehha reminds Jasleen of something and she asks Anup to stay back. Jasleen asks Karanvir and Srishty to join them. She asks Anup to keep something intact. She kisses Anup and requests to keep it there. Anup says its enough and wants to see if anybody wants to kiss him. Everybody can't stop laughing.

A fight starts between Karanvir and Nirmal over wasting food. Romil blames others and all fight against Romil. Shivashish also takes a part in the fight. Sourabh asks everyone to calm Down. Shivashish and Romil start fighting again. Romil gets so infuriated that he starts abusing Shivashish. Sourabh takes Romil away. Sourabh tries to calm down Shivashish and requests to keep Romil and Shivashish apart.

Romil asks Deepak to get close with the jodis but Deepak says that there are some people with whom he can't blend. Deepak discusses his strategy and game plan. He also shares his equations with Nirmal.

The flap of the drawing room opens and they see that Mangluto is gone. Everyone is unhappy and especially Deepak.

Jasleen asks everyone to join the pool. Roshmi joins in. Deepak and Sourabh also join in.

Bigg Boss asks everyone to become statue. He describes the situation and welcomes Vikas Gupta to show sach ka ayena. Vikas says how disappointed he is by Nehha Pendse, Srishty Rode. He motivates Urvashi for standing against her group and staying with the truth. He describes how similar he was with Sreesanth. He asks Karanvir to stand up and make his own statement and stick to them. He describes how his mom likes Saba and Somi. Vikas shares he was happy that Anup supported Dipika for the house and then he got disappointed as he went and never took a stance when Urvashi declared about the cheating. Vikas asks Jasleen to stay a little decked up. He says that Sourabh is wasting a place. He asks Nirmal to take a stance. Vikas tells how wrong Romil has been. Vikas makes Dipika emotional and asks her to be strong and take the centre stage. Vikas takes Kriti outside to Roshmi and Shivashish. He shares how the duo showed something else before entering the house and now has turned something else. He scolds Shivashish for misusing the opportunity. He goes to Deepak at the end says that he has already become a favourite and playing well, however, he should stick to the plans. Vikas shares he came to show everyone the actual face and wants them to perform well. After Vikas leaves, everyone starts discussing all the things Vikas said. While Sreesanth is upset Deepak tries to make him understand what Vikas meant.

Bigg Boss asks the names for Kaal Kothri nominations. The singles start nominating Romil and Nirmal for their cruelty in the task. They start defending themselves and negating all. A fight starts between the duo against the singles. Kriti and Roshmi also take their name and Nirmal-Romil try to save themselves. Sourabh, Deepak also take the same name. Nirmal and Romil start fighting against all. Karanvir stops the fight and asks Saba and Somi to take the names. They nominate Shavishis and Sourabh. Anup nominates Deepak and Urvashi for going against the team. Sreesanth supports Urvashi for staying with the truth. Nirmal says that he is not sorry for throwing water. The fight starts.

Sreesanth gets really angry and tries to make his point, Nirmal and Romil keep fighting. Sreesanth asks Bigg Boss to call him and talk. He tries to get out of the house. The participants come to stop him.