The premiere didn't live up to our expectations.

The 12th season of Bigg Boss started this Sunday however; the premiere didn’t live up to our expectations. With host Salman Khan’s age-old jokes and puns, unnecessary humiliation and drama by the makers and not so great lineup of contestants, the season didn’t click well with the masses. As per BollywoodLife’s review, “There was not a single line that managed to evoke genuine laughter. It really looked like Salman Khan was struggling to be funny.” Although the contestants didn’t waste any time to start picking up fights with each other, it all looked forced. The makers tried their best to keep up the drama quotient, however, neither that nor the celebrities could excite the audience. We asked our loyal readers to vote whether they found the season premiere boring or happening. And here, we have the results! Also Read - TV News Weekly Rewind: Bigg Boss 15 updates, Pearl V Puri's bail, The Kapil Sharma Show's return and more

After a brief poll and voting from our loyal set of readers, the results were in consensus with our review. The viewers found the 1st episode of the show ‘BORING'. 63% audience found the season boring while the remaining 37% found it happening. One of the major reasons behind this could be a series of things. Also Read - Bigg Boss 15: As fans wait for the new season, here's a throwback to the most bizarre moments of Salman Khan's show 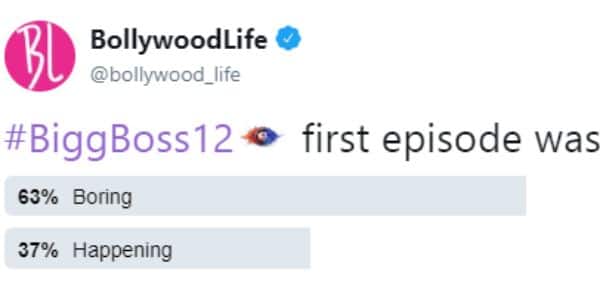 One of the major reasons the hype around Bigg Boss’ inauguration is always high is due to the anticipation of its contestants. Every year, the makers try their best to keep the audience hanging till the minute the show goes on air, regarding who would be entering the house. However, this time, not just the names, but also the look of the contestants from the premiere night were out. As a result, there was nothing left for the viewers to keep them on the edge of their seats. Major chunks of the show were also revealed as promos, leaving nothing for the audience to watch it on TV. Another primary reason could be the lazy scriptwriting and unnecessary twists. For instance, entries of Shivashish Mishra in a torture room and Deepak Thakur and Urvashi Vani in jail was not really required.

However, it is the viewers who have the final call. With such a stark majority, the makers should pull up their socks and redeem themselves. That is the only way, the showrunners would be able to catch up with the success of the last season.