Saba Khan, Urvashi Vani and Jasleen Matharu are safe this week as Saurabh Patel gets eliminated this week. 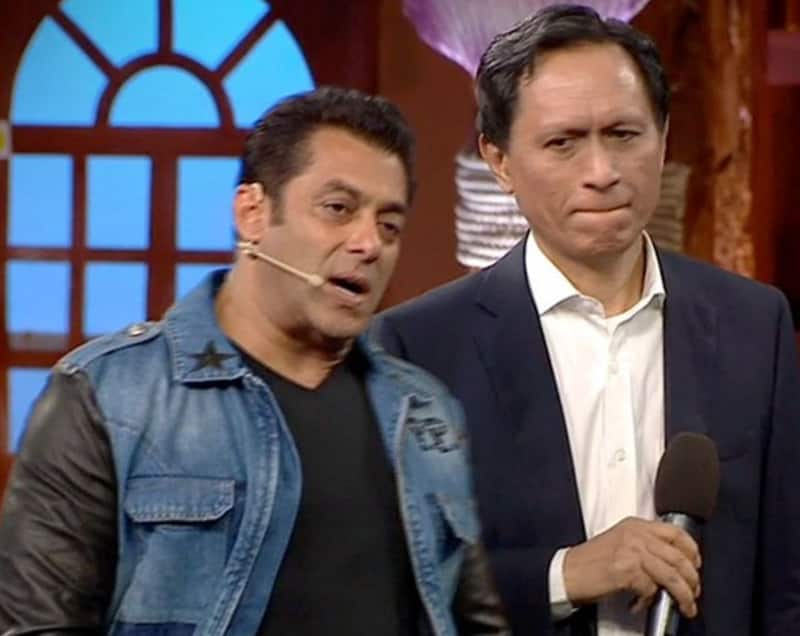 The elimination day of the week is here as host Salman Khan makes a dashing entry. Karanveer Bohra and Srishty Rode are safe already meaning one from the emailing contestants - Urvashi, Saurabh, Jasleen and Saba - will be out of the house today. Host Salman takes a recap of the emotional proceedings in the house before interacting with inmates. Also Read - Trending Entertainment News Today: Disha Patani sparks lip and nose job speculations; Urfi Javed's reaction on Alia Bhatt's pregnancy grabs eyeballs and more

Salman sends Karanveer into confession room where he has a special gift for him. It's Karanveer's an AV of wife and kids have a special message for him. It's his daughter's 2nd birthday and Karanveer breaks down and gets emotional as he watches his wife and kids. Also Read - Avrodh 2 actress Aahana Kumra says she can't relate to Salman Khan shaking his buttocks and doing Dabangg

Moving on, Salman invites Sreesanth's wife Bhuvaneshwari, Srishty's fiance Manish and Dipika's fiance Shoaib into the stage as special guests. Dibang is also invited as a special judge into the episode who will now listen to the advocacies of contestants. Dibang says Surbhi has brought life into the house and because of that, everyone is playing their game. Dibang also says that Salman himself has made Deepak a star because of his encouragement. Also Read - Shruti Haasan's PCOS and endometriosis, Shenaz Treasurywala's face blindness and more Bollywood actors who faced severe health issues

Shoaib is made to stand in the Katghare and asked why Dipika so diplomatic in her approach in the house. Shoaib says that she always gives her all in any activities and tasks and is going in the right path. Diband makes a point in that she convinces strong contestants into what she wants. Shoaib agrees to it and says she does with peacefully. Bhuvaneshwari talks about the point when Sreesanth wanted to get into nominations to go back home and celebrate his son's birthday and also his anniversary. But Shoaib says it was all in the game that Dipika took it on her to get into nominations.

Manish is in Katghare for Srishty and is asked why does she take a step back when there's a group activity. Manish says that she hasn't been confident since beginning and was being told from the start that she isn't appearing much in the activities and conversation.

Bhuvaneshwari is in the Katghare now for Sreesanth and the first offense against the cricketer that he is half emotional and half realistic making him a confused inmate. Bhuvaneshwari defends that he is not just playing the game but is living the game. She also says that Sreesanth is like that in real life too. Second offense against him is he is disrespectful towards others. Bhuvaneshwari states a disclaimer that Hindi is not his first language and hence he is misunderstood. Third offense is that he is against Dipika totally and has had a grudge against her. But wife says he is like that but forgives sooner as he did with Dipika.

Time for the Sultani Akhada and host Salman talks to contestants about it. Salman asks Romil and Sreesanth to up their game as they need to enter the Akhada. Sreesanth and Romil gear up to enter the ring and have brief chat with their friends in the house.

Round 1, the verbal war, and Romil starts the proceedings. Romil says that he believes in never giving up and also says Sreesanth gives up very soon. Sreesanth, in defense, says that Romil always keeps asking if he is the Mastermind in the house and many times told him Deepak is the Mastermind which leaves everyone in splits. Romil says Sreesanth seeks attention a lot and fakes a lot. The cricketer defends himself and says that it's all in the game. After the voting, Romil gains 4 votes and Sreesanth gets 7 votes.

Round 2, the physical test, and the two indulge in the activity. Romil gains momentum and goes on to win the Sultani Akhada in today's episode.

Sreesanth and Romil is back in the house and the two indulge in an argument a bit. A little bit of chitchat between Vakil and Sreesanth, and Romil and Deepak before they gather back on the couch.

Moving on to the elimination, host Salman gets to the ultimate moment of the episode. Salman gets emotional about his dog which passed away recently and talks to contestants about it. Salman shares a video with the contestants in which his dog is seen singing along with his friend who is shooting the video which makes everyone a bit emotional and few break into tears.

And now comes the moment of the episode and the first one to be safe is Saba. The second to be safe is Jasleen which leave Urvashi and Saurabh in danger zone. The housemate to get eliminated this week from the house is Saurabh Patel as he gets lesser votes amongst the four in danger zone.