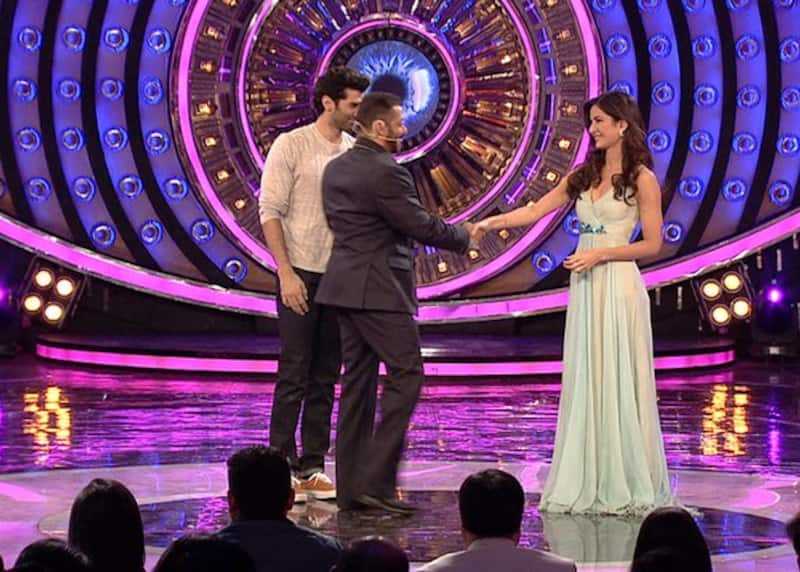 And they are here, all set to spell MAGIC like never before...

Tonight's Bigg Boss 9 finale is going to be every bit mesmerising. While we already got glimpses of Katrina Kaif and Aditya Roy Kapur's sensuous act on Fitoor songs. This picture of Kat meeting her ex-boyfriend and show host Salman Khan is enough to leave you excited. A beautiful Kat dressed in an angelic gown, shaking hands with a dapper looking Salman- oh! How we missed seeing these two in one frame? Also Read - Trending Entertainment News Today: Disha Patani sparks lip and nose job speculations; Urfi Javed's reaction on Alia Bhatt's pregnancy grabs eyeballs and more

We hear the first conversation that Salman and Katrina had on stage was full of showering praises on each other. Salman couldn't stop admiring Kat's journey in Bollywood. Totally in awe of this Fitoor actress, he recalled her first film and how today, she has evolved into this good looking actress who can dance to make everyone go weak in the knees! Whoa! Imagine watching this conversation on air tonight? We're already dying out of excitement to see this former couple together. Also Read - Avrodh 2 actress Aahana Kumra says she can't relate to Salman Khan shaking his buttocks and doing Dabangg

Apart from sharing adorable moments in company, word is that Salman might even dig a little on Katrina's break-up with Ranbir Kapoor, although we doubt if this will really happen. But nevertheless, let's not spoil the fun by taking this on a serious note. Now is the time to just wrap all your work before this blockbuster episode goes air at 9pm tonight. It's definitely going to be the BEST. EPISODE. EVER! Don't miss it guys! Also Read - Katrina Kaif wants Vicky Kaushal to have a beard like Hrithik Roshan; he replies, 'We need to talk'