So finally we have a confirmation! Are we excited to see him on the show? Read on and tell us...

Bigg Boss 9 is currently in it's third week and for long now people have been speculating who could possibly be the first wild card entrant on the show! While rumours have been rife with names like Sahil Khan and Keith's ex-wife Samyukta Singh. Well, it can now be confirmed that this new game changer is going to be none other than Style actor, Sahil. Yes! Despite the show's policy of not leaking out any details, Sahil just hinted us by sharing this highly suggestive picture! He posted his flight ticket on his social media page stating, "On My Way Back To ‪#‎MUMBAI‬ Guess y??? " Now you'll be really foolish if you don't get the catch. It's Bigg Boss 9 for sure!!! Also Read - Tiger Shroff's Heropanti 2 will be very different from his other popular films – Crucial deets REVEALED [EXCLUSIVE] 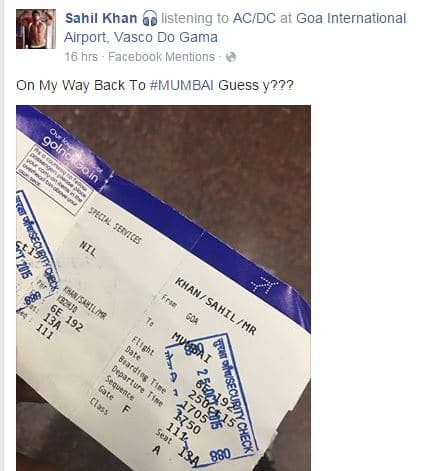 Considering Sahil is already back in Mumbai, we assume he is going to enter the show in the middle of this week! But before he enters the show, let me brief you a little about his controversial past. Khan recently made headlines when Tiger Shroff's mother, Ayesha Shroff filed a case against him for duping her of Rs 5 crore. The legal battle took an ugly turn when Sahil claimed that Ayesha was having an extra marital affair with him. On Ayesha’s protest that he’s gay, Khan further demanded an on-camera session where he’d produce intimate pics of him with Ayesha to prove that he’s not a homosexual. As reported by a leading daily, Sahil had, in fact, submitted a few pics of him and Ayesha in compromising positions. Also Read - SAY WHAT! Tiger Shroff made Krishna Shroff believe she was adopted? Latter REVEALS a side of the Ganpath star that no one knows [EXCLUSIVE VIDEO]

We wouldn't be surprised if Sahil brings back this dreaded past on the show! Coz let's admit it, if there is one word synonymous with Bigg Boss 9, it has got to be ‘controversy...!