'After reading all the negative comments a part of me wanted to die', reveals Bigg Boss OTT's Neha Bhasin in an emotional note

Bigg Boss OTT has wrapped up with Divya Agarwal coming out as the winner. One of the contestants who has been spoken about a lot is Neha Bhasin. The singer was trolled immensely on social media. People did not like the closeness between Pratik Sehajpal and Neha Bhasin. They felt it was a little too cringe-worthy to be watched with friends. Neha Bhasin has now revealed that she was affected by the trolling. In a note on social media she said that a part of her wanted to die after she saw the bad comments. People had even made mean comments on her husband, Sameeruddin asking how was he watching his wife's antics on OTT. Also Read - Bigg Boss 15: Amidst wild card entry rumours, Raqesh Bapat's heart aches for Shamita Shetty; will #ShaRa reunite on Salman Khan's show? 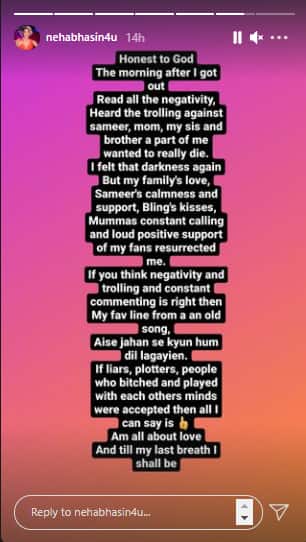 The singer has revealed that it was her family that pulled her out of the mental and emotional crisis. Outside, Akshara Singh was rather critical of Neha Bhasin. She even referred to her as Chundi on social media. Even Moose Jattana did the same. Her good friend Pratik Sehajpal has also urged his fans not to pass loose comments on Neha Bhasin. Also Read - Trending TV News Today: Karan Kundrra rushes to Tejasswi Prakash's aid after task goes wrong, Mohsin Khan's future plan, Anuj to confront Anupamaa about marriage and more 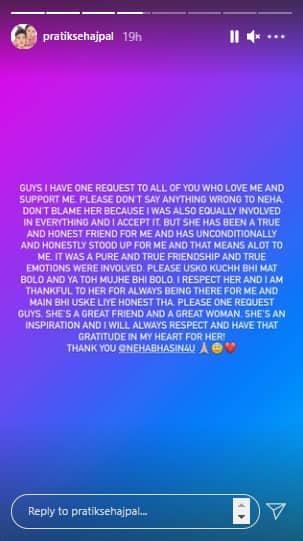 We can see that his note is a very heartfelt one. He has written that Neha Bhasin supported him without any conditions and emotions of the two are involved. He told everyone that he was equally party to whatever happened inside the house and no one should only blame Neha Bhasin. There is a lot of speculation on who will enter the Bigg Boss 15 house. Pratik Sehajpal is the confirmed contestant along with Divya Agarwal, the winner of the show.