Bigg Boss 13: 80% fans felt Dalljiet Kaur’s elimination from the house was NOT FAIR!

Last weekend, Bigg Boss 13 saw Dalljiet Kaur and Koena Mitra getting evicted from the house of Bigg Boss 13. Fans of Dalljiet had taken the social media by a storm when the actress left the house. Even Dalljiet found her eviction quite shocking.

Bigg Boss 13 is in its third week. The show hosted by Salman Khan took a slow start and has failed to garner good viewership. Last weekend, Bigg Boss 13 saw double elimination which was the only redemption and reason apart from Salman Khan for a better TRP. Last weekend, we conducted a poll where we asked if Dalljiet Kaur's eviction was unfair. And guess what? We have results. Looks like none are happy with the way this new season of Bigg Boss 13 is turning out. Also Read - Bigg Boss 13 fame Shehnaaz Gill looks divalicious and ready to take the world by storm in latest pics from Dabboo Ratnani's calendar shoot

For starters, Dalljiet Kaur had made a decent impression in the house. She had been taking a stand and playing fair right from the start. But the actress couldn't survive more than two weeks in the house and was evicted in the second week. She was nominated along with Rashami Desai, Koena Mitra, Shehnaaz Gill, and Shefali Bagga. Coming back to the poll, about 80 per cent of the voters feel that Dalljiet's eviction was an unfair decision on Bigg Boss' part. Also Read - Shehnaaz Gill's absence from social media makes fans miss her; trend 'WHERE ARE YOU SHEHNAAZ' on Twitter 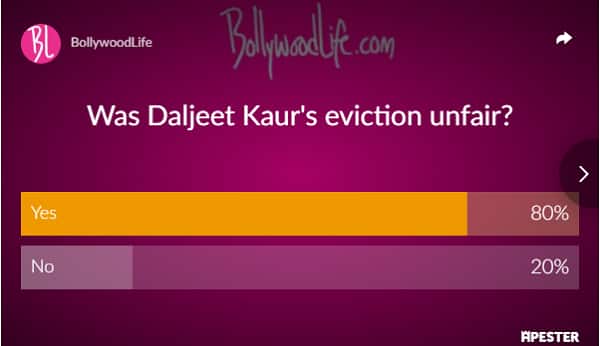 Coming back to the elimination day, Dalljiet herself felt that she could have survived longer in the house. In an interview with IANS, Dalljiet said, "I am very much upset. I thought I will survive in the house for more days but I don't know what went wrong. May be I didn't fit in that 'fake love and friendship' thing. We all came here to show our individuality but most people got involved in making fake connections and I was not one of them. This season has become more like Splitsvilla."

On being asked what her plans were next, Dalljiet told the portal that having terribly missed Jaydon while locked up in the house, she was going to spend some time with him. "Coming into Bigg Boss was a drastic step in my career. I left one show for this. I am hoping something good happens and I get good projects. Right now, I just want to spend some good time with my son."
For more scoops and updates, stay tuned to BollywoodLife.