Devoleena Bhattacharjee is one of the most popular actresses. She is known for her Bigg Boss 13 stint alongside other shows. She recently got into an online fight with Shehnaaz Gill fans. Check what it is all about below: 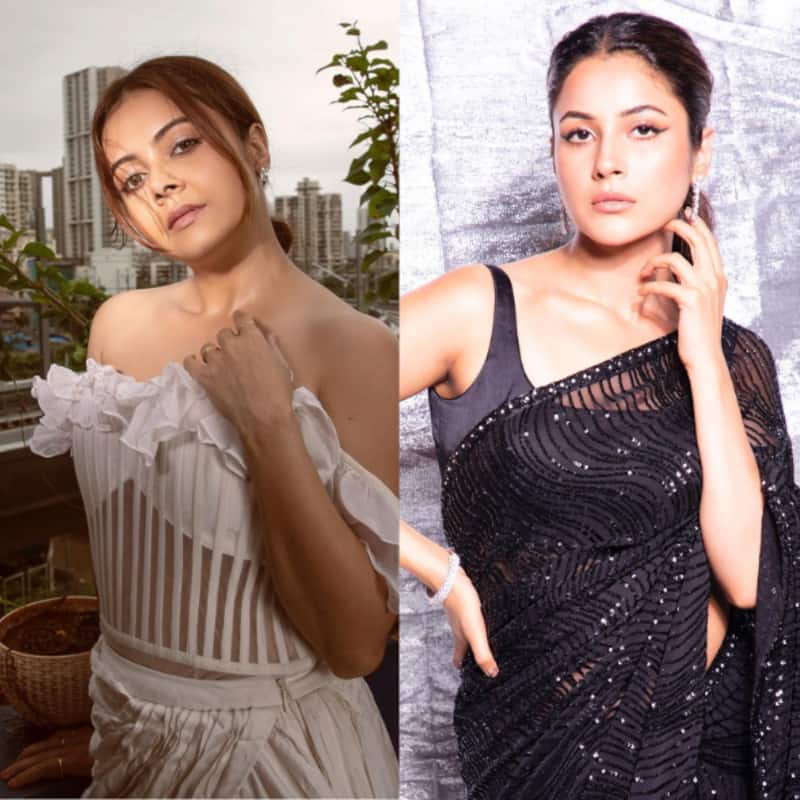 Bigg Boss 16 is currently a hot topic in the town. The Salman Khan-hosted TV show is one of the most widely watched TV shows in the country. And a lot of previous Bigg Boss contestants such as Devoleena Bhattacharjee, Gauahar Khan, Rahul Vaidya, Kashmera Shah and others have been watching Bigg Boss 16 ardently. Devoleena, in fact, has been quite active and vocal about her opinions after watching the episodes. However, recently, Devoleena Bhattacharjee got into an argument with a netizen over her alleged comments on Shehnaaz Gill. Also Read - Bigg Boss 16: Gauahar Khan takes a dig at Tina Datta; says she finally has a taste of her own medicine after Shiv chooses Nimrit as the new captain

Both Shehnaaz Gill and Devoleena Bhattacharjee are big names in the showbiz. They grab headlines in Entertainment News for various reasons. This time, a netizen seemingly took a jibe at Devoleena. An old conversation was mentioned wherein Devoleena asked Rashami Desai in Bigg Boss 13 why was she giving her clothes to Shehnaaz Gill during Weekend Ka Vaar. The netizens quoted Devoleena saying that Shehnaaz cannot afford and neither see such clothes in her life. It was a jibe at her as the netizen talked about the success of Shehnaz Gill. Also Read - Bigg Boss 16: Devoleena Bhattacharjee sides with Sumbul Touqeer and her father; calls show 'Hell disgusting' 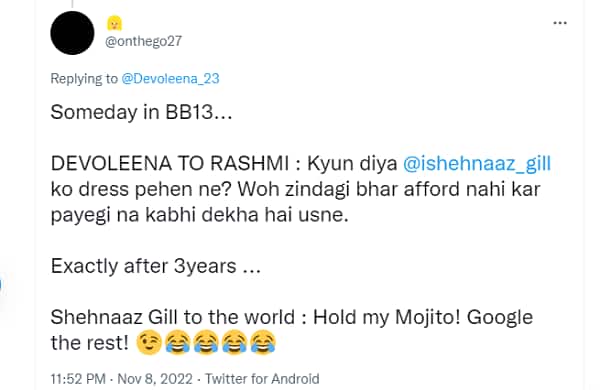 Devoleena lashes out at the netizen

Devoleena Bhattacharjee asked the netizen to show the clip and prove their words. If the netizen was able to prove it, she would do anything. Soon a lot of Shehnaaz Gill fans started responding to Devoleena's tweet saying that she indeed said such a thing. A few clips of Devoleena taunting Shehnaaz Gill and Rashami Desai joining the same also have been shared. 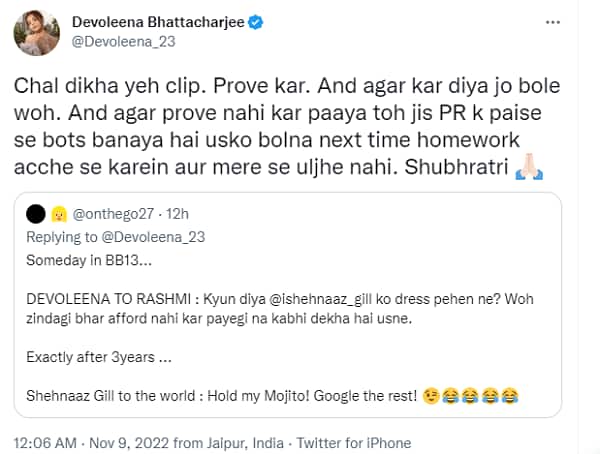 I REMEMBER THIS SO CLEARLY.
IT WAS AT NIGHT WHEN DEVOLEENA SAID THAT TO RASHMI .@Devoleena_23 you definitely did say this Don not try and lie.@ishehnaaz_gill is a million times more successful than any bb 13 contestant.
This is all due to her good heart .
Please stop lying

you did said it. You actually fought with rashami and told her why she gave her dress to shehnaaz. Then in the next day you and rashami fought with shehnaaz. Shehnaaz was wearing blue and white pajamas in the kitchen and sid was there too. You too both said you can’t afford

Someone show her the clip plz ..

Its too early to get into this. But i think you need it. I never heard any word like afford here in anyway. 2nd the context was here ki jo log apki madad karte hai zaroorat padhne par unki hi pehchan nahi puchi jaati naahi unki buraai ki jaati hai. https://t.co/TWKWzI3HPm

Well Said ?...At that point u were trying to make her understand ki yeh wahi log hai tumahara saamne achhe bante hai for their benefits and peet peeche burai karte hai ?
Ignore these Guys D just stay away from negativity And Have fun ❤️ <3#DevoleenaBhattacharjee https://t.co/XViL6qdX0S