Bigg Boss 13: Not Devoleena or Siddharth, fans are more excited to see Dalljiet Kaur in the house!

We hear that celebs including Sidharth Shukla, Devoleena Bhattacharjee, Rashami Desai, Aarti Singh and Dalljiet Kaur will be seen inside the house this time on Bigg Boss 13. We even asked you; who are are you most excited to see and the results are out!

Bigg Boss is all set to return to rule the roost and how! That's right Salman Khan's show which is always high on drama is returning to the small screen to entertain us all. The show will begin from September 29 and fans can't wait to see the drama unfold this time around. If you're not in the know; there will be no commoners to spice things up but something tells us the new contestants will spill the tea just enough! Recently, Salman Khan was seen at the launch of Bigg Boss 13 which was held in Andheri. It was a grand event and host Salman Khan was accompanied by Ameesha Patel and TV actors Arjun Bijlani, Puja Banerjee and others.

Bigg Boss 13: Inmates to have a furry companion in the house? - watch video

While we are still at that, we hear that celebs including Siddharth Shukla who even put out a tweet saying that he needed his fans' support on a very important journey, Devoleena Bhattacharjee, Rashami Desai, Aarti Singh and Dalljiet Kaur will be seen inside the house. We even asked you; who are are you most excited to see and the results are out! And believe it or not, Dalljiet Kaur is a clear winner with 57 per cent. See for yourself! Also Read - Bigg Boss 13: Do you think the friendship between Siddharth Shukla and Shehnaaz Gill is over? Vote now! 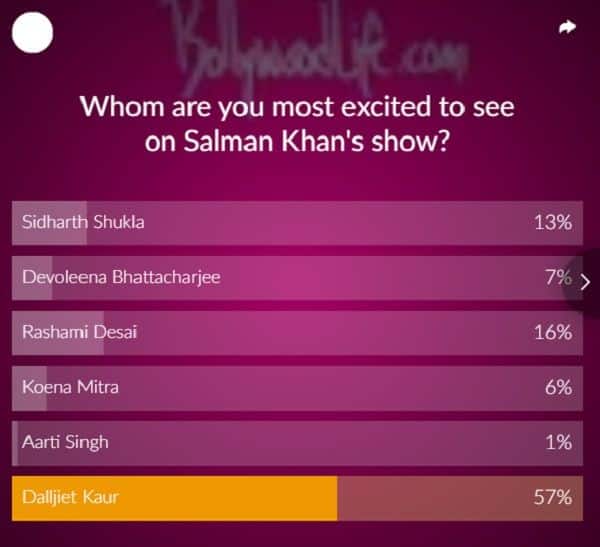 Guddan Tumse Na Ho Payega actress Dalljiet Kaur had undergone a rather ugly divorce with Shaleen Bhanot as she slapped charges of dowry harassment, attempt to murder and domestic violence on the actor and his family.

During the launch event, Salman Khan was alleged of getting into an argument with a photographer. However, as it turns out, Salman and the said photographer never had an argument in the first place and it has been misreported. As per a source, Salman's statement of banning him was in utter fun just how his easygoing personality goes, as the concerned photographer and Salman know each other. "There was no argument between the photographer and Salman Khan. Both know each other. Salman's statement regarding banning him was in a fun and on a lighter note. The actor has been very wrongly misunderstood, " the source was quoted saying.

So, how excited are you for Bigg Boss 13? Let us know, tweet to us @bollywood_life!