Bigg Boss 13: Sidharth Shukla makes it to the list of the most searched personalities of 2019 on Google, Koena Mitra is also on the list

Bigg Boss 13 is trending like crazy on social media. This season has been a blockbuster in the true sense of the term. All the contestants have a loyal fan following on social media. Everyone is curious to know about these people. Google has released its list of the top 10 most searched personalities for 2019 and Sidharth Shukla has made it to the list. He is on the ninth spot followed by Koena Mitra at the tenth place. Sidharth Shukla's explosive temperament has spiced up the show in an unexpected manner. While many have lashed out at his code of conduct, the general public has found him real and connected with him. Sidharth's love-hate relationship with his former co-star Rashami Desai has also been a subject of headlines.

The other celebs on the list from showbiz are Vicky Kaushal, Tara Sutaria and Lata Mangeshkar. The Nightingale of India, Lata Mangeshkar was the on the second spot after Wing Commandar Abhinandan Varthaman. Also Read - 15 days since Sidharth Shukla's demise: 15 things that happened after the actor left us suddenly and in shock 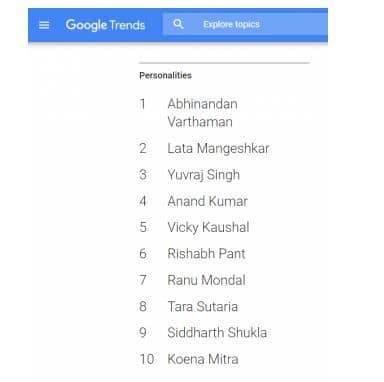 The actor's relationship history was also a huge contributor to the curiosity around him. He was rumouredly dating Arti Singh and Rashami Desai and both the women are in the house. This is not all. Paras Chhabra's current girlfriend Akanksha Puri is also supposed to be his ex. On the show, he has forged a warm bond with Shehnaaz Gill and people lovingly call them as #SidNaaz. Sidharth was the target of the Bahu gang from day one but now things have changed as the house is divided into groups. Paras Chhabra also spoke about Sidharth Shukla was in rehab for a couple of years. We guess the handsome hunk will hundreds of questions to answer after his exit. Stay tuned to BL for more scoops and updates!