Bigg Boss 13: Sidharth Shukla has been backstabbed by all his friends in the house, feel fans — view poll results

Bigg Boss 13: Fans feel the favourite contestant from the show Sidharth Shukla has been backstabbed by all his friends, Asim, Arti and Shehnaaz. Check out the poll results here

Bigg Boss 13 has been doing well on the TRP charts and is the most-watched reality show on television right now. The recently got extension of five weeks because of its good TRPs and also became the most successful season of all the previous seasons of Bigg Boss. This season has been quite different from the previous ones since the start. We got to see a lot of changes in the show format which was loved by the audience. This season had the most number of wild card entries as well which was one of the reasons for the increase of the TRP of the show. Since the show began Sidharth Shukla's name has been at the top and he is considered as one of the top two contestants. In the beginning, he had a group of friends who were quite close to each other. Also Read - From Shivangi Joshi's lavish house to Nia Sharma gifting herself an SUV – the super-expensive purchases of these TV celebs will make your JAW DROP

Sidharth Shukla, Asim Riaz, Arti Singh, and Shehnaaz Gill looked like one strong group at the start. However, this group began breaking soon. Arti Singh never received the trust from Sidharth and hence he never treated like a part of the group. Later, Shehnaaz Gill also was left out when Himanshi Khurana entered the house and Shehnaaz's attitude changed. It was only Asim and Sidharth who were left but soon even their friendship took an ugly turn. However, Sidharth is now left all alone in the house. He has a couple of friends in Paras Chhabra and Mahira Sharma, but they cannot be trusted. Arti Singh does support him, but she, too, has been backbiting him every now and then to almost every other housemate. Recently Shehnaaz Gill also leaned towards Paras Chhabra. She is more with Paras than Sidharth and it has been proved time and again. Also, even Paras and Mahira seem to be with him for votes from his fans. We had asked the fans if they feel that Sidharth Shukla has been backstabbed by all his friends in the house. Fans say that he has been backstabbed by all his friends in the house. 74% feel he had been ditched while the rest 26% feel he has been not. Check out the poll results here: Also Read - RIP Sidharth Shukla: Asim Riaz, Rahul Mahajan, Shefali Jariwala, Rajkummar Rao and others to reach at Cooper Hospital and late actor's home pay their last respects 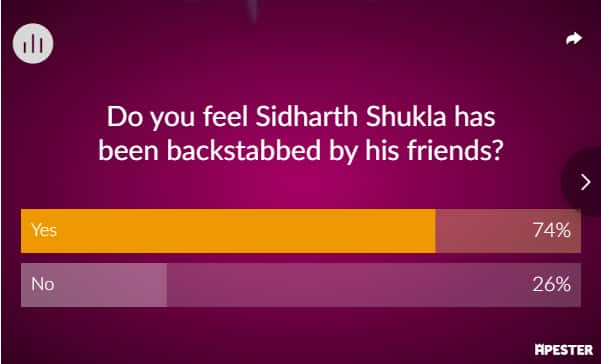