Bigg Boss 14: After Vikas Gupta's allegations against his family, brother Siddharth Gupta asks Sushant Singh Rajput to give him 'the strength to fight this lying evil'

It seems like Siddharth Gupta is not happy about his brother Vikas Gupta's allegations. He made a cryptic post asking his late friend and actor Sushant Singh Rajput to give him strength to fight 'this' lying evil.

Vikas Gupta had made some shocking allegations against his own family. While opening up to Arshi Khan about his issues, Vikas had said that his family members had dissociated themselves from him after he came out in public about his sexual orientation. He said that he loved his brother Siddharth Gupta more than anyone else and the latter allegedly snatched his mother from him. But it seems like Siddharth is not happy about Vikas' allegations. He made a cryptic post asking his late friend and actor Sushant Singh Rajput to give him strength to fight 'this' lying evil. Also Read - Bigg Boss 15: Is Raqesh Bapat entering Salman Khan's show? Bigg Boss OTT finalist reveals [EXCLUSIVE]

Siddharth shared a throwback picture on Instagram wherein he was seen chilling inside the swimming pool with Sushant Singh Rajput. "Miss you Bhai! Give me the strength to fight this lying evil. Give me the strength to maintain my character!” Siddharth wrote on the picture post Vikas' allegations against him. For the uninitiated, Siddharth and Sushant were once roommates and good friends with each other. Also Read - Bigg Boss 15: Rubina Dilaik, Gauahar Khan and Shweta Tiwari to be a part of the show as tribe leaders? 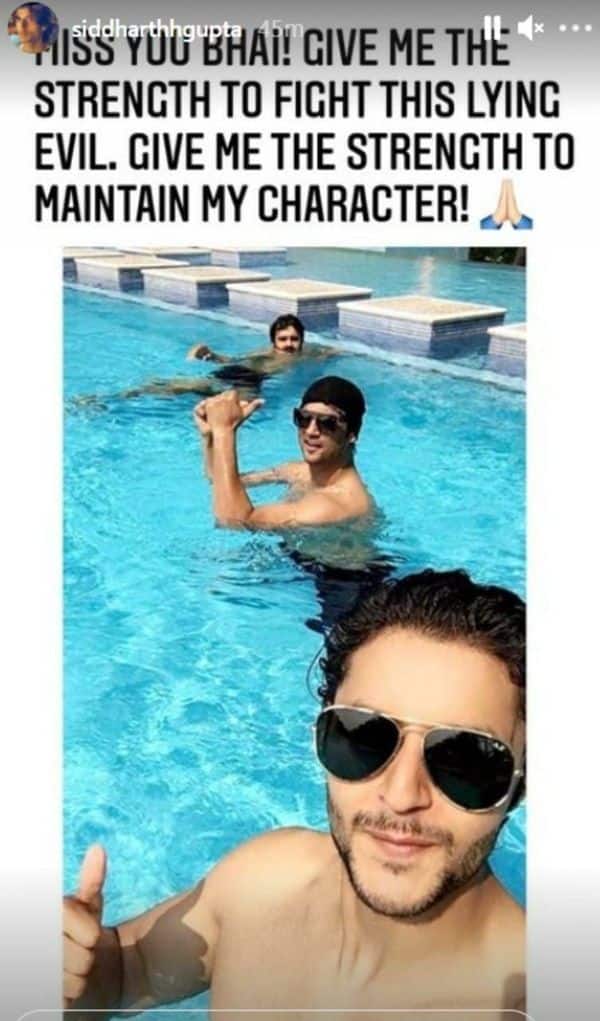 Earlier, Vikas' mother Sharda Gupta had also reacted to her son's allegations. She had said that the family had cut off ties with him before they got to know about his sexuality. She also clarified that their decision to dissociate themselves from Vikas had nothing to do with his sexual orientation. She had shared a long statement to end up all the speculations. Her caption reads, “Patience has its limits. If you don’t fight for what you want, Don’t cry for what you lost. Krishna (Bhagwat Gita).”

While speaking to Arshi, Vikas had said, "Yaha aa k realise hua ki mai maa se bahut pyar karta hu. Mere chote bhai se sabse jada pyar kiya, waha pe galti hui. Meri maa chin li, mere papa 30 saal se mere saath nahi the. Sirf baad me aye the, jab ye sab hua, dekhne ki mai zinda hu ya nahi (After coming here, I realised that I love my mother too much. I loved my brother the most but that was my fault, he snatched my mother. My dad did not visit me for 30 years and came back only to see if I am alive).”