Bigg Boss 14 fans feel Aly Goni should propose Jasmin Bhasin on national television and take their friendship to one level ahead as #JasLy.

Aly Goni and Jasmin Bhasin's friendship has been talk of the town from past few years among the viewers. While the fans speculate that they are in a relationship after their adorable posts for each other on their birthday, during the stint in their Bigg Boss, we are witnessing that their bond is more than friendship but they are not confessing their feelings to each other. While we were not quite not sure about our opinion, we conducted a poll to know whether Aly should propose Jasmin on national television or not. The results are out and it is clear that audience completely agrees with us as 72 percent of the fans feel he should propose the Naagin 4 star on national TV. Well, we definitely want this thing to happen as it will be a big moment for all #JasLy fans. Also Read - Disha Parmar reveals how she felt when people slammed Rahul Vaidya and her relationship as fake publicity stunt and said, 'Yeh Chod Degi' 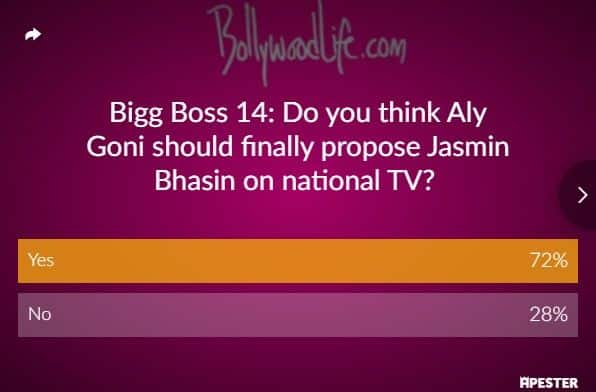 While Jasmin was recently criticised by fans for her dual image, Aly defended her and told PinkVilla, "It was never like that. If she is taking a stand for herself, that doesn’t make her negative. When she was not taking a stand, then the entire country was calling her fake. The people today who are calling her negative are the same people who criticised her of being fake and cute, so these people really don’t have a conscience or steady stand. They are mindless critics. I don’t care and I know Jasmin is not bothered by it. Her loyal fans know her and support her. I think she is playing very well." Also Read - Bigg Boss 15: Rubina Dilaik, Gauahar Khan and Shweta Tiwari to be a part of the show as tribe leaders?

Speaking about the rift between Jasmin, Rubina Dilaik and Abhinav Shukla he added, "Actually Jasmin, Abhinav, Rubina were good friends even when I entered. It wasn’t like my entry caused a rift there. We would sit together and hang but during a task when Rubina and Jasmin got into a war of words, that’s where things went wrong. It is their individual perspective. Jasmin feels Rubina is wrong and vice versa. But it is okay. I tried to mend their differences as a third person, once or twice but since they couldn’t I didn’t push too much because they are hurt and I am sure they will find a way out eventually. You never know."