Jasmin Bhasin's fans will jump for joy knowing that 63% of the viewers voted in favour of the Naagin 4 actress. The rest of the 37% though felt that Jasmin Bhasin's decision to save Aly Goni over Rubina Dilaik was wrong.

For Bigg Boss 14 contestants, this week's nomination task wasn't just tough but also emotionally draining. The ones who sat on the throne were instructed to tell their close friends to destroy their most valued items. We saw Rubina Dilaik, Abhinav Shukla, Rahul Vaidya, Nikki Tamboli destroying their favourite stuff to save Aly Goni, Kavita Kaushik, Pavitra Punia and Jaan Kumar Sanu. Also Read - Eijaz Khan reveals his experience of meeting lady love Pavitra Punia's parents in Delhi and it is relatable AF

But Jasmin refused to nominate Aly for eviction to save Rubina from nomination. She reasoned that Aly had come to Bigg Boss house because of her. Some of Rubina's fans were disheartened with Jasmin's decision even though she cried and apologised to Rubina for her actions. We decided to conduct a poll and ask the audience to determine what they felt about Jasmin's decision and whether it was right or wrong. Also Read - Bigg Boss 15: Bigg Boss 14's Pavitra Punia shares her excitement for the new season; says, 'Dekhte hain kaun kitna jaanwar niklega'

The poll results are finally out after receiving tremendous votes from the audience. And Jasmin's fans will jump for joy knowing that 63% of the viewers voted in favour of the Naagin 4 actress. The rest of the 37% though felt that Jasmin Bhasin's decision to save Aly Goni over Rubina Dilaik was wrong. Going by the poll, we can safely say that Jasmin was absolutely right in her decision. Also Read - Happy Birthday Abhinav Shukla: Here's how Bigg Boss 14 helped the actor by giving his relationship with Rubina Dilaik a 'second chance' 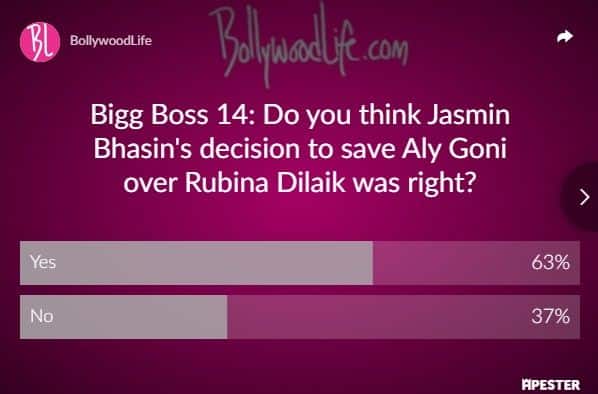 Keep watching this space for more updates on Bigg Boss 14.