Bigg Boss 14 contestants Kavita Kaushik and Eijaz Khan's fights have been the highlight now and we had asked fans if they feel that their constant fights have become boring or not.

Bigg Boss 14 contestant Eijaz Khan and Kavita Kaushik have been the most talked about contestants. Kavita Kaushik entered the show as a wild-card contestant. along with Shardul Pandit and Naina Singh. Kavita Kaushik's entry performance and her interactions with Salman Khan made us believe that she would be an entertaining person. Many even thought that Kavita Kaushik would bring some changes in the house and make the game interesting. Eijaz Khan who was already inside the house was happy that someone who is close to him will be entering now. She also became the captain of the house when she entered the house but in that week itself, she lost control. She was irritated with Eijaz Khan and spoke disrespectfully with him. She abused and used dirty words. She also pushed him during that fight and her aggressive behaviour was not appreciated by the audience. Hence she was eliminated within a week but was again brought back. Also Read - Bigg Boss 15: Yeh Rishta Kya Kehlata Hai actor Karan Kundrra approached for Salman Khan's controversial reality show?

Even after she has returned, her fight with Eijaz Khan has not stopped. In every little thing, they both get angry on each other and begin fighting. Eijaz kept screaming at Kavita, while the latter didn't leave any chance to provoke the former. Hence, we had asked fans whether they feel that Kavita Kaushik and Eijaz Khan's fights over petty issues has become boring or not. Fans are bored of these stupid fights. 90% of feel that the fights between Eijaz and Kavita have become extremely boring. 10% feel that it is not boring. Some of them were also of the opinion that the makers of Bigg Boss 14 have intentionally brought back Kavita so that she could lock horns with Eijaz and eventually boost the show's TRPs. Take a look at the results here: Also Read - Bigg Boss 15: Tina Datta and Manav Gohil to be a part of Salman Khan's show? 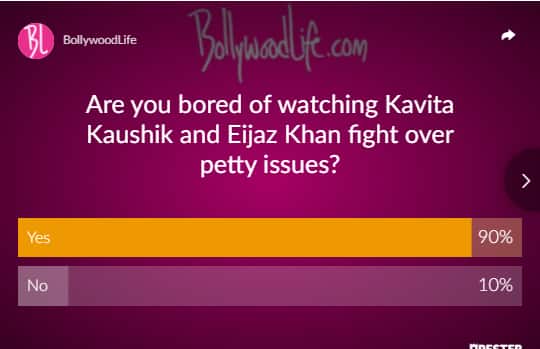 Well, we hope we do not get to see any more of these boring fights between Eijaz Khan and Kavita Kaushik.