Bigg Boss 14: Fans do NOT agree with Rahul Vaidya that Rubina Dilaik is a poor task performer – view poll results

Bigg Boss 14 contestant Rahul Vaidya believes that Rubina Dilaik is a poor task performer. Hence we had asked fans if they agree with his statement. Fans have given their verdict and they do not agree with Rahul Vaidya.

Bigg Boss 14 has been loved by the fans. After some really boring episodes initially, the show is now on an interesting mode. The entry of challengers in the show has surely brought the entertainment factor in the house. The challengers have shown some good energy during tasks. However, since the start, Rahul Vaidya and Rubina Dilaik have been the top favourites of the audience. When Rahul had left the show, many were disappointed. Now, that he has returned fans wish to see him and Rubina together but it seems that cannot happen. Recently, during the duck task, Rahul Mahajan, Jasmin Bhasin and Rubina Dilaik were the third lot to go inside the pond for the Duck Task. While Jasmin Bhasin and Rahul Mahajan did some comedy in the task, Rubina Dilaik did not look at all interested. This did not go unnoticed by Kashmera Shah. Also Read - Disha Parmar flaunts her bikini look from her honeymoon in Maldives; shares cosy pictures with Rahul Vaidya

She said that Rubina Dilaik did not have any interests in doing tasks. She said other contestants took tasks so seriously in their seasons. Kashmera Shah said it would be a shame if someone like her won the show. Rahul Vaidya was also seen discussing Rubina Dilaik's game with Manu Punjabi and Aly Goni. He said Rubina Dilaik's game would start only after the eviction of husband, Abhinav Shukla. He said it would be interesting to see her without her support system. He said that Rubina Dilaik has not done much at all on the show. Manu Punjabi said she has her own logic behind not doing too much, and it is working for her. Aly Goni also agreed with Rahul Vaidya to some extent. Hence we had asked fans whether they agree with Rahul Vaidya that Rubina is a bad task performer. Well, fans do not agree with Rahul Vaidya. 64% of people feel that Rubina Dilaik is not a bad task performer while the rest 36% feel she is a bad performer. Take a look: Also Read - Disha Parmar reveals how she felt when people slammed Rahul Vaidya and her relationship as fake publicity stunt and said, 'Yeh Chod Degi' 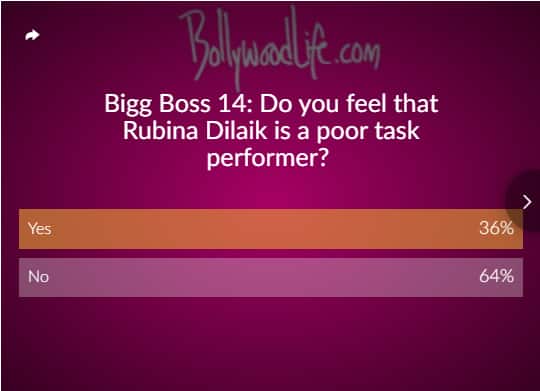