Bigg Boss 14: Rubina Dilaik was right to not convince Eijaz Khan to give away the captaincy medal, say fans - view poll result

The poll results are finally out and 80% of voters feel that Rubina Dilaik did the right thing by not convincing Eijaz Khan to give away the captaincy medal. The remaining 20% of viewers feel she should have tried her bit to win the task.

Bigg Boss 14’s remaining contestants Abhinav Shukla, Eijaz Khan, Jasmin Bhasin and Rubina Dilaik have been overshadowed by the new entrants from the previous seasons like Vikas Gupta, Arshi Khan, Manu Punjabi, Rahul Mahajan, Rakhi Sawant and Kashmera Shah, who have made their way into the house as challengers. With the entry of the challengers, Eijaz has completely changed his game. He made his alliance with Manu Punjabi and Arshi Khan and it was quite obvious that he would play along with them during the captaincy task. Also Read - Bigg Boss 15: Rubina Dilaik, Gauahar Khan and Shweta Tiwari to be a part of the show as tribe leaders?

As per the task, Rahul, who was declared the King of the house, had to choose a captain. Six buzzers were blown and with each buzzer, the medal chain was to be transferred to the other contestant. First, the medal chain was with Rahul and he gave it to Eijaz. It was then clear that Eijaz would give the chain to Manu or Arshi. He even declared that he wants Manu to be the captain. Also Read - Bigg Boss 15: Do you think Pratik Sehajpal would have won Bigg Boss OTT had he not opted out of the show for Salman Khan's show? Vote Now

But Eijaz complained that Rubina and Abhinav were not even trying to convince him. Rubina explained that she was aware that Eijaz has made up his mind to make Manu the captain, then why should she try. Eijaz had an argument over this with Rubina. He told her that she and Abhinav only sit in one corner of the house and chit chat. Eijaz accused Rubina of not being interested in the game. However, Rubina was clear that she did not try as she knew that it won't help. Also Read - Bigg Boss 15: Yeh Rishta Kya Kehlata Hai actor Karan Kundrra approached for Salman Khan's controversial reality show?

While viewers were also divided over Rubina and Eijaz's argument, we had conducted a poll to determine if Rubina made the right decision by not convincing Eijaz to give her the captaincy medal. The poll result is finally in and 80% of the voters feel that Rubina did the right things by not convincing Eijaz to give away the captaincy medal. The remaining 20% are of the opinion that Rubina should have tried her bit to win the task. 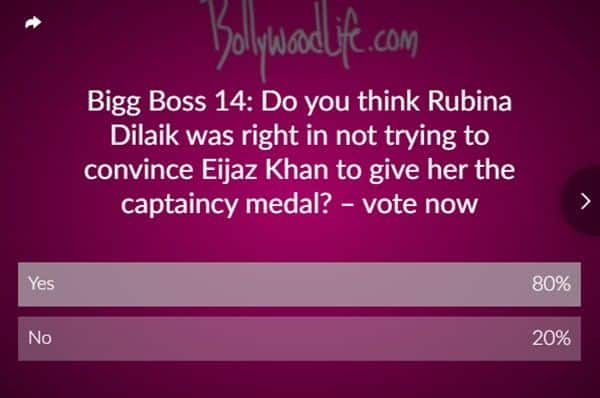 Meanwhile, on the Weekend Ka Vaar episode, Eijaz admitted that he had already decided to make Manu the captain, adding that he was just toying with Rubina to make it seem like he was playing neutral.