Bigg Boss 14's challenger, Arshi Khan's game-changing decision, last week had left everyone shocked. After playing the whole captaincy task for Rahul Vaidya, in the end, she gave the captaincy to Vikas Gupta. We had asked fans whether they feel Arshi was right in picking Vikas over Rahul as the new captain of the house.

Bigg Boss 14 has been going on well and fans are loving the new episodes of the show. Earlier, the contestants did not play well and hence the show looked boring. Many even tagged it as the most boring season until now. The challengers though have brought a new energy in the house. They played a good game and have entertained everyone. We saw so many changes post their entry and even the TRPs have gone up. Vikas Gupta and his challengers Arshi Khan, Rakhi Sawant, Manu Punjabi, Rahul Mahajan, and Kashmera Shah changed the whole game and it seemed like Bigg Boss 14 has begun in a new way altogether. However, it was Arshi Khan and Vikas Gupta who have been the most talked about contestants. Their ugly fight will surely be remembered every time one will speak of Bigg Boss 14. Vikas Gupta has pushed Arshi Khan in the pool as he brought in his mother in their fight. Also Read - Disha Parmar flaunts her bikini look from her honeymoon in Maldives; shares cosy pictures with Rahul Vaidya

Post that he was eliminated and returned the next week itself and it was Arshi who was equally responsible for the fight. After his returned, he played the mastermind way. It was the captaincy task where, we saw Rahul Vaidya along with Aly Goni making a strategy in the hot-air balloon task to win it and become the new captain of the house. While housemates like Nikki Tamboli, Jasmin Bhasin, Rakhi Sawant, Sonali Phogat and Arshi Khan supported Rahul to win the task, we saw Arshi Khan flipping at the end moment and making Vikas Gupta the new captain of the house. Many called her a game-changer but many felt she was selfish and did that only to clear her image. We had asked fans whether they feel that Arshi Khan was right in picking Vikas Gupta over Rahul Vaidya as the new captain of the house. 61 % of people feel she was right in doing that while only 39% feel she was wrong. Take a look below: Also Read - Disha Parmar reveals how she felt when people slammed Rahul Vaidya and her relationship as fake publicity stunt and said, 'Yeh Chod Degi' 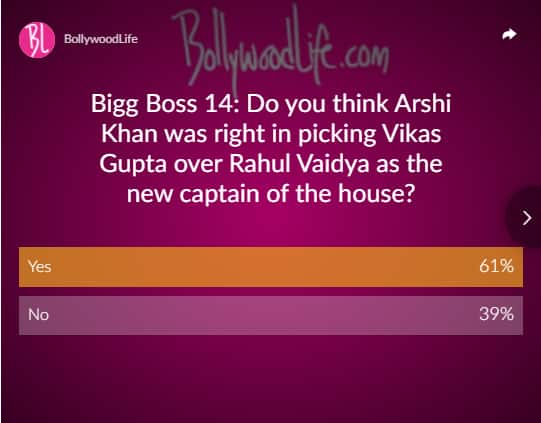 However, after Vikas Gupta became the captain, we saw him not doing his duty well and in fact we saw him breaking the rules of the house. All the housemates were disappointed with his captaincy and Arshi herself said that she is ashamed of her decision to make Vikas the captain.