The poll result is finally in and 52% of the voters feel that Vikas Gupta had intentionally revealed intimate details of Kavita Kaushik's allegations to Abhinav Shukla and Rubina Dilaik. On the other hand, 48% are of the opinion that Vikas was concerned about Abhinav and Rubina over Kavita's allegations, which is why he wanted the couple to be informed.

Known for his manipulative mind, Vikas Gupta was brought back on Bigg Boss 14 as a challenger. Before he entered the house, show host Salman Khan gave Vikas five challenges, which upon completion, gave him super powers in the form of two joker cards. The challenges included Vikas instigating a fight between Abhinav Shukla and Rubina Dilaik, in front of all the other housemates. And while Vikas was silently completing the challenges, the mastermind had revealed to Abhinav what allegations Kavita Kaushik and her husband Ronnit Biswas had levelled against him outside the house. Vikas told Abhinav that after Kavita walked out of the Bigg Boss 14 house, she and her husband tweeted about him, wherein they accused him of having drinking problems and sending dirty messages to Kavita at midnight. Also Read - Bigg Boss 15: Do you think Pratik Sehajpal would have won Bigg Boss OTT had he not opted out of the show for Salman Khan's show? Vote Now

Abhinav was shocked to hear this. Vikas told him to not discuss this topic with anyone and that his wife, Rubina, may get frustrated after hearing the allegations. Abhinav and Rubina confront Aly Goni about it, who admits that it was Kavita's husband who had tweeted about him. Also Read - Bigg Boss 15: Yeh Rishta Kya Kehlata Hai actor Karan Kundrra approached for Salman Khan's controversial reality show?

Aly then confronted Vikas and blamed him for spoiling Rubina's game. Vikas explained to Aly that those were not his intentions and he just wanted Rubina to know the truth. Even Kashmera Shah and others blamed Vikas for purposely revealing things to Rubina and Abhinav. Also Read - Bigg Boss 15: Tina Datta and Manav Gohil to be a part of Salman Khan's show?

However, Vikas remained firm that he did not mean to demoralise Rubina or Abhinav. Hence, we had thought of asking Bigg Boss 14 fans if Vikas Gupta intentionally informed Abhinav and Rubina about Kavita Kaushik's allegations against them.

The poll result is finally in and 52% of the voters feel that Vikas Gupta had intentionally revealed intimate details of Kavita Kaushik's allegations to Abhinav Shukla and Rubina Dilaik. On the other hand, 48% are of the opinion that Vikas was concerned about Abhinav and Rubina over Kavita's allegations, which is why he wanted the couple to be informed. 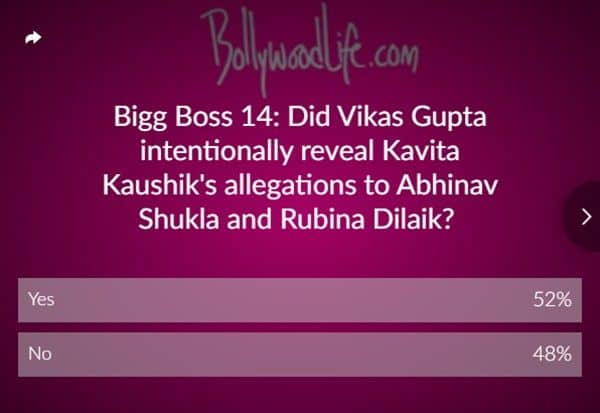 Meanwhile, Vikas Gupta was shown the exit door after getting physically violent with fellow housemate Arshi Khan. He pushed Arshi into the swimming pool. Following which he was told to leave the show as it was against the rules to get violent with another contestant. Vikas got violent with Arshi after an alleged altercation with her. Earlier this week, both of them were seen at loggerheads with each other. There were several instances when Arshi was misbehaving and yelling at Vikas. Though, Vikas has been evicted from the show, it remains to be seen if he’ll get a second chance to return to the house.