While Jasmin Bhasin has said on couple of occasions that she will not meet Rubina Dilaik outside the Bigg Boss 14 house, Rubina, too, seems to have decided to stay away from her.

It seems like Rubina Dilaik and Jasmin Bhasin will continue to give cold shoulder to each other even after coming outside the Bigg Boss 14 house. The two were once friends and used to have great camaraderie on the show. However, things started getting awry between the two and eventually they turned into bitter enemies. While Jasmin has said on couple of occassions that she will not meet Rubina outside the Bigg Boss 14 house, Rubina, too, seems to have decided to stay away from her. And perhaps, which is the reason why Rubina skipped tagging Jasmin in her appreciation post to her latest song, Tera Suit, with her boyfriend Aly Goni. Also Read - Shaheer Sheikh, Hina Khan, Abhinav Shukla – 5 tech-savvy Television celebs who are complete pros with gadgets

The Bigg Boss 14 winner took to her Instagram stories to promote Aly and Jasmin's latest song, Tera Suit, by sharing its poster and a swipe up link. She tagged Aly Goni and singer and composer Tony Kakkar but skipped Jasmin in her post giving the latter a cold shoulder. "Yay," Rubina wrote to express her excitement as she rooted for the song. It remains to be seen Jasmin and Rubina will once again be friends in real life as well. Also Read - Man crush Monday: Shaheer Sheikh, Sidharth Shukla, Sai Ketan Rao; 7 TV HOTTIES we don’t mind drooling over – view pics 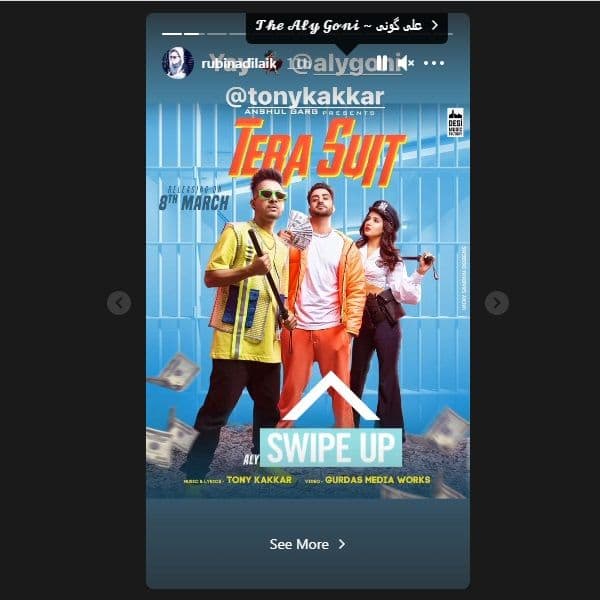 Also Read - Hina Khan, Dipika Kakkar, Gauahar Khan, Aly Goni and other celebs show us what their 'Iftar feast' looks like amid COVID-19

Meanwhile, Tera Suit is Jasmin's first music video, and that too with Aly, and the actress says it was indeed a special experience. "Anything I collaborate with Aly, it is very special. After 'Bigg Boss', I have been in an extremely positive and happy phase. I wanted to reflect that happiness on screen. Our fans have already given us immense love and now we want to give back to them through this music video. It is a party song; it's happy, colourful and exciting. I have a feeling people will play the song during very often during Holi," Jasmin told IANS.

The song has been composed and sung by Tony Kakkar, and Jasmin is all praise for him. "Shooting with Tony was also great fun, as Aly and I are funny and positive in nature, so all together it was great fun. With Aly, this was the first time we have worked together. I used to wonder earlier what kind of co-star Aly would be but after working with him I can clearly say he is amazing, (a co-star) cannot get better than him," she said.

"After reality shows, this is our first collaboration and Jasmin's first music video with me. I am very happy. I have always loved Tony bhai's songs and 'Tera Suit' is a party anthem. Our fans wanted to see us together post 'Bigg Boss', and we just hope they love the song," she added.