Bigg Boss 15: Fans feel that it was not needed on part of Simba Nagpal to drag in Asim Riaz in his argument with Umar Riaz - view poll results

Bigg Boss 15 has started off very well. Everyone seems to be very competitive and eager to win. Of course, the show is all about surviving and making our best impression in whatever time you get. One of the handsome contestants of the season is Simba Nagpal. Fans know him from MTV Splitsvilla and Shakti-Astitva Ke Ehsaas Ki. Salman Khan has trolled Simba Nagpal for not doing anything on the show on quite a few occasions. He has said that he has no work in the house rather than eat, sleep and stay in the background. He has been teasing him as a kitten too. Also Read - Bigg Boss 15: Parag Tyagi bats for Umar Riaz; asks makers 'Wondering what does a contestant needs to show?' Himanshi Khurana has a priceless reaction

Well, the map brought out the aggressive side of Simba Nagpal. He got into an argument with Umar Riaz. It is no secret that these two are extremely strong physically. There was a physical tussle and later they began screaming at one another. Simba Nagpal told Umar Riaz that he could never match up to the standards set by Asim Riaz on the show. As we know, Asim Riaz was the runner-up of Bigg Boss 13 and one of the most loved contestants ever on the show. Simba Nagpal told Umar Riaz that he was totally useless on his show. Also Read - Bigg Boss 15: Rakhi Sawant has a savage comment for Umar Riaz's haters on the show; asks, 'Sab ka pichwada kyun jal raha hai'

Fans left that Simba Nagpal crossed the line when he made that remark for Umar Riaz and left is was totally not needed. Around 70 per cent of our readers felt the same. Everyone is an equal inside the house. Take a look at the voting percentage below... Also Read - Bigg Boss 15: As Miesha Iyer-Ieshaan Sehgaal get evicted, let's take a look at jodis who made a lot of moolah post their exit – view pics 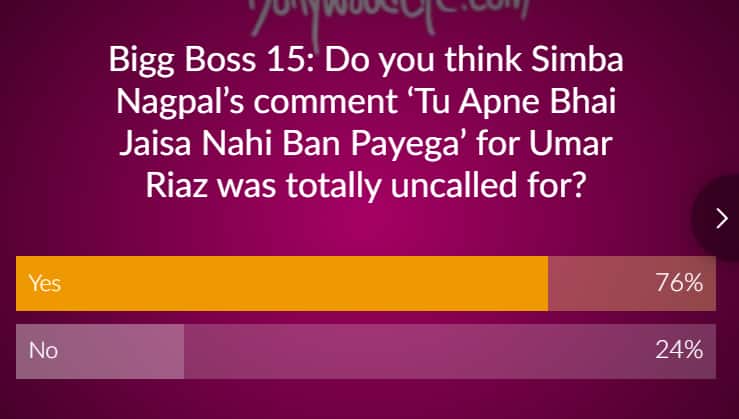