The Weekend Ka Vaar that went by was an action-packed one for all fans of Bigg Boss 15. Salman Khan gave a huge firing to Afsana Khan for her antics inside the house. The actor told her that her words were highly derogatory and she has been disrespecting the platform. Post that, Farah Khan came inside the house. She was given the task of telling the housemates to rank themselves. The housemates took positions and then she gave them their ranks. On the top spot, she placed Karan Kundrra. There is no doubt that he is showing all his reality show expertise to great effect. From planning strategies to manipulation and being flirty, he has been doing it all. Also Read - Bigg Boss 15: Sidharth Shukla's fans are elated as Salman Khan heaps praises on the Bigg Boss 13 winner; trend ONE MAN ARMY SIDHARTH — read tweets

She gave the second place to Tejasswi Prakash. She said she was surprised to see how well Tejasswi was doing on the show. The TV actress and Khatron Ke Khiladi contestant is coming across as entertaining, strong-headed and competitive. She is one of those who has a huge organic following outside. She is also No.2 on the Ormax ranking. The person who was on the third place according to Farah Khan was Vishal Kotian. He is known to play Birbal on TV. A master manipulator, Vishal Kotian is constantly plotting and has slyly switched sides from time to time. Also Read - Bigg Boss 15 Weekend Ka Vaar, 27 November 2021 Live Updates: Shamita Shetty gives Devoleena Bhattacharjee an earful for calling her dogla

Fans were surprised when he took Vidhi Pandya's name after calling her his sister on the show. Our readers also agree with the top three shortlisted by Farah Khan on Weekend Ka Vaar. Check out the results below... Also Read - Bigg Boss 15: Will Tejasswi Prakash and Karan Kundrra be at war to be the winner? Latest Ormax charts predict tough competition within THESE contestants 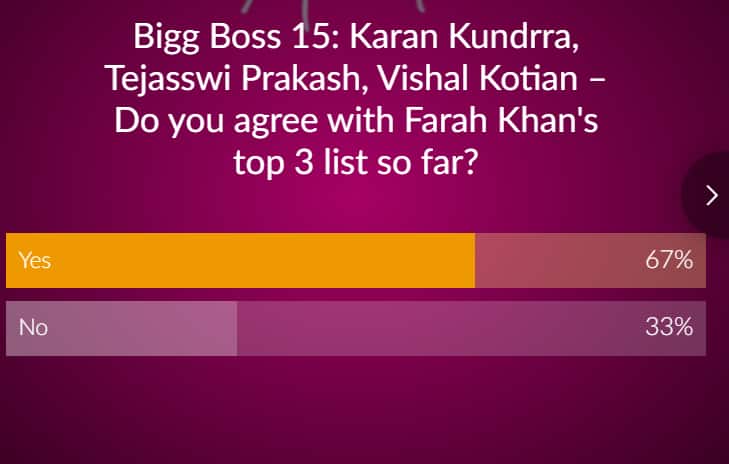