Gauahar Khan is disappointed that Tejasswi Prakash is not revolting against Karan Kundrra's toxic behaviour on her. She feels that women needs to give priority to respect over other things.

Tejasswi Prakash and Karan Kundrra may have patched things up, but a majority of the audience is not impressed with how the actress is taking his behaviour lying down. Gauahar Khan who is an active commentator on Bigg Boss saw the episode and came out in support of Tejasswi Prakash. She slammed Karan for his comments on Teja. The IT couple of Bigg Boss 15, Karan Kundrra and Tejasswi Prakash got into a fight and the former used some truly nasty words. The two got into an ugly argument over Tejasswi Prakash's statements on Karan during the task. It was over Karan and Umar prioritizing Shamita Shetty for the win against her task with Pratik Sehajpal. During Karan and Tejasswi's argument, Karan lashed out at her and said a lot of things in the heat of an argument. Also Read - Bigg Boss 15: Top 5 Most Popular Contestants by Ormax Media – Tejasswi Prakash leads; Umar Riaz replaced by THIS contestant

One of the sentences used by Karan was 'Jaa shakal Dekh Apni (Go and look at yourself).' Gauahar highlighted the same in a tweet and urged every woman to stand up for her respect. She added that it goes both ways. Gauahar felt very bad for Teja and felt like giving her a big hug. "Shakal dekh apni, teri asliyat dikh gayi and so much more….. love = respect. Respect = Love . I felt very bad for teja! wanted to hug her. To all the girls who are reading this, respect is super important, both ways. Please treat yourself with love n respect first !" Gauahar's tweet read. Check out Gauahar's tweet here: Also Read - Trending TV News Today: Palak Purswani confirms breakup with Avinash Sachdev, Urfi Javed trolled, Devoleena Bhattacharjee's jail taunt to Rakhi Sawant and more 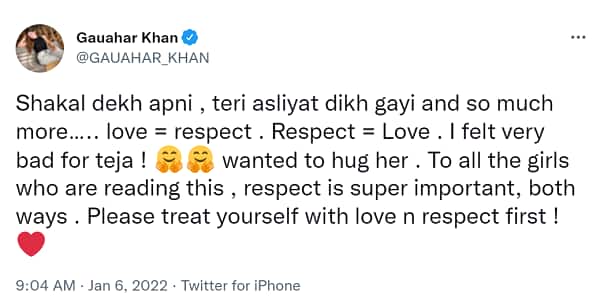 Gauahar Khan is an ardent follower of Bigg Boss. She has been dishing out her opinions on Twitter after watching the episode. Meanwhile, last night in Bigg Boss 15, we saw Karan Kundra and Tejasswi Prakash patching things up too. However, not before Karan getting fed up with trying to explain to Teja about Rakhi Sawant's strategy to break them apart.