Bigg Boss 15: Has Afsana Khan returned to Mumbai for a meeting with the channel creatives for a comeback on Salman Khan's show?

Bigg Boss 15: Has Afsana Khan returned to Mumbai to have a meeting with the creatives of the channel? This is what we know

It looks like Bigg Boss 15 makers are planning to bring back the wildcards. We have heard how Donal Bisht and Vidhi Pandya are now being kept in quarantine for the same. The two were eliminated from the show due to bahumaat, a decision that was panned by one and all. It is being said that these two will make a comeback on the show this weekend. Vidhi Pandya has now been kept in a hotel used for quarantine. There is also buzz that Afsana Khan met the makers of Bigg Boss 15. She had a meeting with them the channel heads and creatives. It seems there are 80 per cent chances of her coming back to Bigg Boss 15. Also Read - Amid reports of ARREST, Jacqueline Fernandez still a part of Da-Bangg Tour? Salman Khan drops major hint 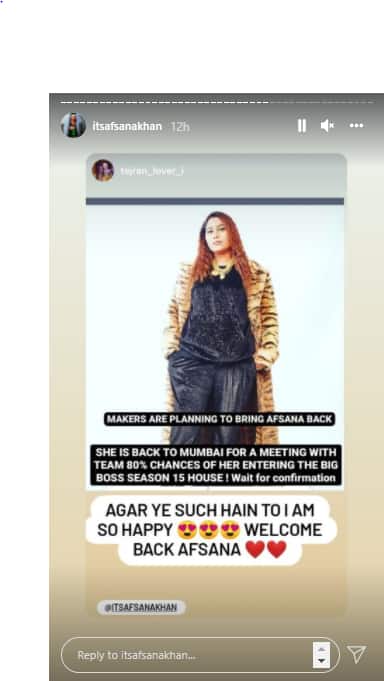 Also Read - Bigg Boss 15: 'It's not working out'; Karan Kundrra BREAKS UP with Tejasswi Prakash over Ticket to Finale task? WATCH

The singer has even shared this on her Instagram handle. We do not know if this is a sign that she is coming back. Her ouster from the show left Rajiv Adatia rather upset. We could see that he was in tears. People loved Afsana Khan's bonds with the likes of Umar Riaz and Rajiv Adatia. Some portals said that she needed medical assistance after her ouster from the show. But the singer looks like she is back in form. Her song Barbaad with Raftaar is getting a lot of love. Also Read - Trending TV News Today: Ankita Lokhande injured ahead of wedding with Vicky Jain, Vishal Kotian to return on Bigg Boss 15, Neil Bhatt celebrates Aishwarya Sharma's birthday and more

After Afsana Khan's breakdown, she got support from the likes of Himanshi Khurana and Rashami Desai on social media. They said that people who trolled her should not talk about mental health awareness on social media. Now, Raqesh Bapat and Shamita Shetty are out of the house. The latter needs physiotherapy for a few days while Raqesh has a serious medical issue. Afsana Khan did manage to get the audience attracted as she was an entertainer. People also loved her singing. Let us see what happens from now on!