Bigg Boss 15 is trending almost all day on social media. However, the TRPs of the show is rather low. There are a number of reasons to it. One of the interesting equations on the show has been the one between Karan Kundrra, Shamita Shetty and Tejasswi Prakash. Around ten days back, we heard Karan Kundrra telling Tejasswi Prakash that he likes women like Shamita Shetty. This was also said by Pratik Sehajpal. He has been quite friendly with Shamita all through but things have changed a bit. Tejasswi Prakash is not very fond of the actress and it looks quite obvious at times. The two ladies have maintained that they do not have hard feelings for each other. Also Read - Bigg Boss 15: Viewers call Rashami Desai 'winner material' for calling out Abhijit Bichukale's behaviour in front of Salman Khan – read tweets

We asked fans if they feel that Shamita Shetty is jealous of the friendship between Tejasswi Prakash and Karan Kundrra. A slight majority felt it was indeed so. On the show, Kundrra has been rather conflicted about his feelings for Tejasswi Prakash. He has openly said that he finds her damn cute and she has brought back some missing charm in his life. He also discussed it with Shamita Shetty. She told him that he should discuss it once they are out of the house. She gave the example of Raqesh Bapat and her. Also Read - Bigg Boss 15, Weekend Ka Vaar, Live Updates: Rashami Desai nominates Abhijit Bichukale to be guilty of name-calling and using foul language

Tejasswi Prakash and Shamita have had their share of arguments on the show. It reached a height after she called him insecure. Now, things are still ok. Take a look at the poll results... Also Read - Bigg Boss 15: Gautam Gulati slams makers for allowing violence after the Karan Kundrra-Pratik Sehajpal incident; says, 'Evict whoever is breaking rules' 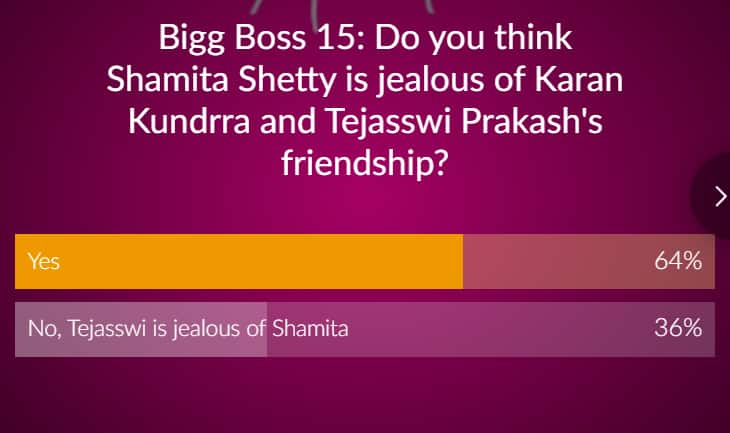