Bigg Boss 15: Only a small majority of people feel that Vishal Kotian is using Shamita Shetty on the show view results

Bigg Boss 15 is doing decently on the TRP charts but many people are saying that they are unable to get attached to one contestant. This is because of the fact that people are so much into the game. Everyone seems to have come in with a plan and know the tricks of the show. One of the contestants who is being disliked by many on the show is Vishal Kotian. He is not one of the big names on the show nor has he been able to create some love angle to keep the interest of the audience alive. What Vishal Kotian is lacking in traditional content he is making up with his strategies. Also Read - Trending TV News Today: Rakhi gets into physical fight with Abhijit Bichukale, Bharti Singh reacts to attending VicKat wedding, Tejasswi Prakash’s brother is all game for TejRan and more

So far, he was seen on the show as Shamita Shetty's No.1 advisor. The two referred to each other as Akka and Anna. However, Rajiv Adatia who entered on the show told Shamita Shetty that Vishal Kotian is too manipulative and is using her on the show. It is true that Vishal Kotian has done his bit to be in the good books of Shamita Shetty but he has always said that his relationship with Shamita is genuine. He says he will care for her like a sister once the show ends. We did a poll on whether fans felt that Vishal was using Shamita for the show. These are the results of the same... Also Read - Bigg Boss 15: Tejasswi Prakash's brother Pratik reveals family's REACTION on TejRan bond and opens up on their March wedding [EXCLUSIVE] 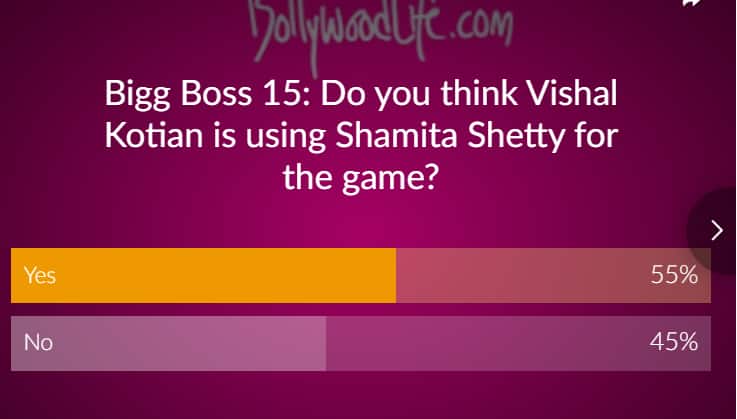 There does not seem to be a general consensus that Vishal Kotian is using Shamita Shetty in the game. She has given him a week to prove that he genuinely values her. Let us see what Vishal does in the coming days!