Bigg Boss 15: Jay Bhanushali was being stupid in his stand over the prize money, feel fans — view poll results

Bigg Boss 15: Jay Bhanushali did not do the right thing in the note task and fans feel he was being plain stupid view poll results

Bigg Boss 15 is turning out to be an interesting season. One of the contestants who has left people with mixed feelings is Jay Bhanushali. Honestly, he is one of the biggest names on the show. People felt that he would create a lot of fireworks. But except his terrible fight with Pratik Sehajpal, Jay Bhanushali has not delivered much. People were rather disappointed with what he did in the task where they had to make notes. Jay Bhanushali said he would not like to play with the winning amount, and refused to be a part of it. He said he felt it did not match his principles. Also Read - Bigg Boss 15, Day 67, Live Updates: Devoleena Bhattacharjee announces Abhijit Bichukale won’t be in the ticket to finale race

The next day he forgot that and agreed to put Rs 25 lakh at stake. Of course, that money also meant the future of six contestants inside the house. As of now, the winner is left with nothing other than the trophy. The winning amount is zero now. While some people are being paid well per week, there is no denying that Rs 50 lakh is also a big sum for many. Our fans also felt that Jay Bhanushali was very stupid with what he did for the task. Check out the poll results below... Also Read - Bigg Boss 15: 'It's not working out'; Karan Kundrra BREAKS UP with Tejasswi Prakash over Ticket to Finale task? WATCH 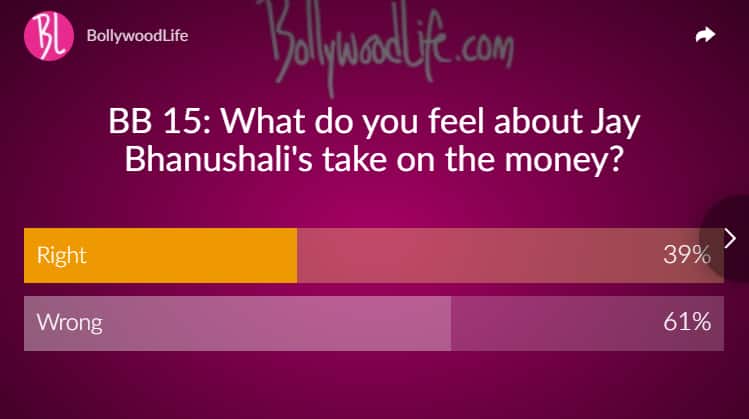 You can see that a huge majority feels that Jay Bhanushali made a wrong decision. Let us see if he can redeem himself on the show!