Bigg Boss 15: Majority of fans feel that Shamita Shetty was wrong in bringing a pair of scissors for the map task — view poll results

Bigg Boss 15: Large number of fans feel that Shamita Shetty made a mistake by bringing in scissors in the pathway task where people were already so violent

Bigg Boss 15 contestants are proving to the world that they mean business on the show. It is a lucrative and life-changing chance for many, and they want to make it while the sun shines. We are also seeing a lot of violence on the show. It is happening during the tasks where people are going all out to snatch the map, which can give them an entry to the main house. Some members like Vishal Kotian, Afsana Khan, Miesha Iyer, Jay Bhanushali and Tejasswi Prakash are already inside. The second part of the game resumed over the weekend and people fought like cats and dogs. Also Read - Bigg Boss 15: Umar Riaz reveals the truth about alleged secret girlfriend Manpreet Kaur

In this game, we saw Shamita Shetty bringing a pair of scissors. Her team of Nishant Bhat and Pratik Sehajpal was overpowered by the junglewaasis. She threw the scissors and told her team members to cut the map. When she threw the scissors, it just escaped a few people. Many felt that it was completely unnecessary and wrong on her part to bring the scissors. As it is, the competitive is rather tough. Donal Bisht injured her hand while Umar Riaz is also hurt. This is what fans felt about her actions... Also Read - Krushna Abhishek wants to gift a swanky luxury car to sister Arti Singh on her wedding, 'Will do the best for her' [Exclusive] 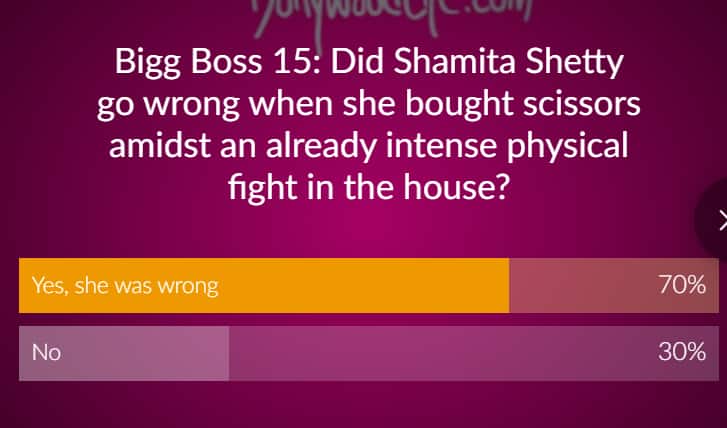