Bigg Boss 15: Niti Taylor slams the barrage of degrading questions thrown at Tejasswi Prakash during the media round; asks 'So much of hate towards her? Aur koi nahi mila'

Bigg Boss 15: Niti Taylor takes objection to the number of degrading questions thrown at Tejasswi Prakash by the press; asks 'So much of hate towards her? Aur koi nahi mila'

Bigg Boss 15's top five has Karan Kundrra and Tejasswi Prakash. The duo #TejRan is one of the most trending ones from the season. Fans cannot get over their chemistry. Karan Kundrra and Tejasswi Prakash's love story has kept people glued inside. Whether it is the night-time cuddles, the fights or how they are always together, the two have the cameras on them. But Tejasswi Prakash faced the brunt of someone rather degrading questions by the media. She was asked about playing the women card and trying to dominate Karan Kundrra. Some of the questions did not sound right and even Tejasswi Prakash called them out. Also Read - Bigg Boss 15: Miesha Iyer and Ieshaan Sehgaal get intimate at a hotel corridor; video goes viral

Now, Niti Taylor has come out in support of Tejasswi Prakash. She has asked makers why there was this barrage of negativity for the Swaragini actress. Niti Taylor tauntingly asked them if they did it to make Shamita Shetty stand out even more. Take a look at this. Also Read - Bigg Boss 15: Here's why Karan Kundrra-Tejasswi Prakash do not owe anyone any explanation on their love angle 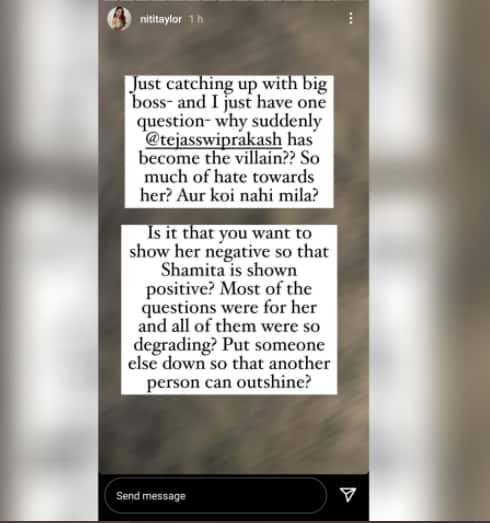 The actress is asking why suddenly has Tejasswi Prakash become the villain. She feels it is unfair to downgrade someone just to make others stand out on the show. Fans of Teja loved this gesture from Niti Taylor.

This is what real women do.. They lift up other women! They support what's right, rather than finding baseless wrongs to pull them down.

Even Divya Aggarwal and Aneri Vajani have come out in her support. Tejasswi Prakash is expected to be in the top three if she plays her game well. Let us see what happens from now on!