Bigg Boss 15 has already given us a love story of Ieshaan Sehgaal and Miesha Iyer. The two fell in love within a day of two to three days. The couple began romancing in the nooks and corners of the house and viewers found it rather cringe-worthy. Even the other housemates began wondering how come so quickly those two fell in love. They have also been skeptical saying it is just a fake love angle. However, Ieshaan Sehgaal has made it clear on national TV that he does have some feelings for Miesha Iyer and that no one can change his mind on that. Also Read - Bigg Boss 15: Is Rashami Desai going to leave in mid-week eviction? Worried fans hope it's not true – read tweets

His long-time friend Rajiv Adatia entered the show and told him that he was completely lost because of his love story with Miesha Iyer. He also said that his parents did not approve of what they were seeing on TV. This led to a quarrel between the two. Rajiv Adatia began crying after Ieshaan Sehgaal said that they weren't friends any more. While it maybe cringe-worthy but the two have sustained due to the love angle. Ieshaan Sehgaal said that he has confessed to Miesha Iyer and he will stand by her. Also Read - Bigg Boss 15, Day 110, Live Updates: Rakhi Sawant blames Tejasswi Prakash for playing the emotional card

But fans feel that he can play a lot better solo if he does not focus on Miesha or Rajiv Adatia. Take a look at the poll results below... Also Read - Bigg Boss 15: Vikas Gupta DEFENDS Karan Kundrra for his 'toxic' relationship with Tejasswi Prakash; says, 'It is very easy to blame the guy' 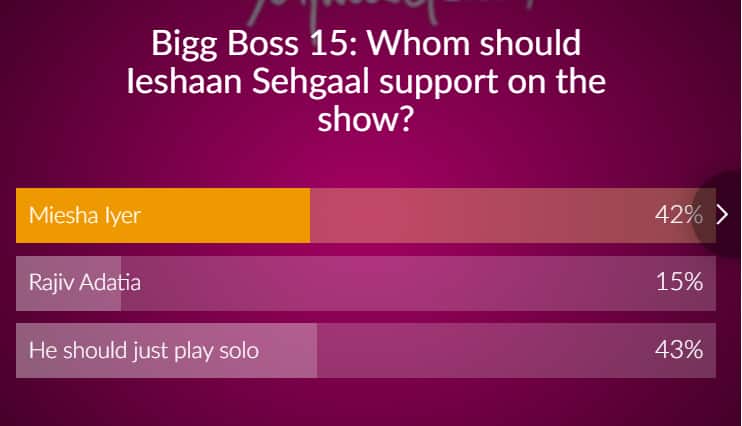 It is a small margin but people feel that Ieshaan Sehgaal will play well solo. We know that he is quite competitive. The love angle has ruined his relationships with the other members in the house!