Karan Kundrra and Tejasswi Prakash are two of the biggest stars of Bigg Boss 15. The most trending hashtag of Bigg Boss 15 is #TejRan. Fans of the two are loving the fact that they have become buddies. Tejasswi Prakash has told Karan Kundrra that she will look after his sanity in the house and take care of him. We are seeing that even he is very attentive towards her. In fact, Karan Kundrra has confessed to Akasa Singh that she finds her damn cute. He has said that he has a soft corner in his heart for Tejasswi Prakash. Akasa Singh has been desperate to do match-making for them. Also Read - Bigg Boss 15: Is Rashami Desai going to leave in mid-week eviction? Worried fans hope it's not true – read tweets

In the past few days, we are seeing that Tejasswi Prakash is unhappy with a few decisions of Karan Kundrra. She has been talking about it to Nishant Bhat. The actress also made it clear to him that she does not like him talking to the Bigg Boss OTT. She said that she finds it disloyal and wants him to make up his mind. Karan Kundrra has said that he has a tough time understanding what Tejasswi Prakash actually wants. We asked fans if they felt that Teja was too controlling or did she just want Karan Kundrra for herself in the game, the answer was a yes. Take a look at the poll results below.... Also Read - Bigg Boss 15, Day 110, Live Updates: Rakhi Sawant blames Tejasswi Prakash for playing the emotional card 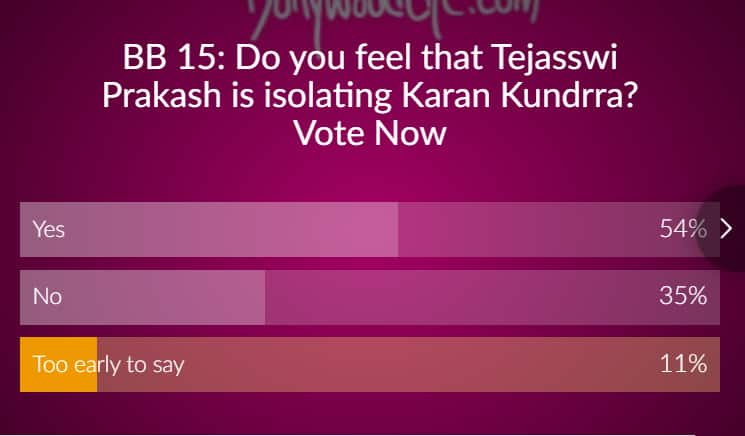 Karan Kundrra was in a relationship with Anusha Dandekar for over five years before they called it quits. He has said that he wants to marry and have a family. Tejasswi Prakash has not been linked to anyone so far.