Bigg Boss 15: Pratik Sehajpal's sister Prerna takes a dig at Karan Kundrra; says, 'Most insecure and jealous human being ever'

Bigg Boss 15: Pratik Sehajpal's sister Prerna takes a dig at Karan Kundrra after he reveals that Pratik was rejected from the audition of a reality show hosted by him

Bigg Boss 15 is turning out to be quite nasty with relatives of contestants fighting it out in the social media space. Now, Prerna Sehajpal the sister of Pratik Sehajpal has shared a clip of Karan Kundrra and Tejasswi Prakash. The love birds are having a chat and Karan Kundrra can be heard talking about Pratik Sehajpal in a rather condescending manner. He makes a snide remark about the Bigg Boss OTT contestant's tattoo too. As we know, he has a Aham Brahmosmi tattoo on his arm. Prerna Sehajpal says it is true that Pratik Sehajpal was rejected from a show but today he is on the same stage as his mentor Karan Kundrra. Also Read - Bigg Boss 15 contestant Karan Kundrra's ex girlfriend Anusha Dandekar had called him an obnoxious man; claimed he has ‘split personality’ 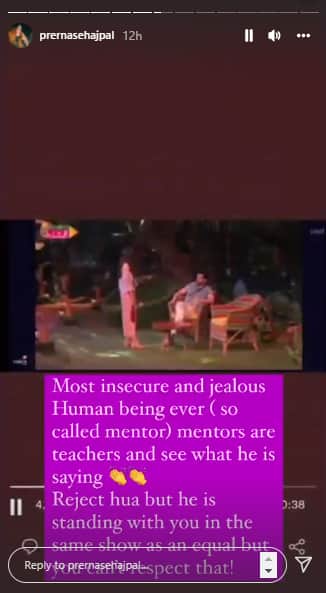 Prerna Sehajpal has been leading the fandom of Pratik Sehajpal. The lady has made immense news outside. She is determined and does not hesitate from giving it back to haters. Her huge online spat with Neha Bhasin made headlines. This season is all about sibling drama off screen. Meenu Kundrra - Karan Kundrra, Prerna Sehajpal - Pratik, Tejasswi Prakash and Pratik Wayagankar are jodis ruling the season. Bigg Boss 15 has been extended by a couple of weeks. This was announced at the start of this week. Also Read - Bigg Boss 15, Day 112, Live Updates: Rashami Desai and Devoleena Bhattacharjee get into a nasty fight

Bigg Boss 15 is a reasonable success online but has flopped with relation to TRPs. The show is suffered due to some stupid decisions of the makers, which has made audience question the credibility. Some wild cards will enter the show soon. Let us see if the game improves in the last few weeks!