Shamita Shetty's boyfriend Raqesh Bapat and ex-Bigg Boss 15 contestant Rajiv Adatia have come out in her support after Rakhi Sawant taunted the Zeher actress about her shoulder.

This week's Bigg Boss 15 Weekend Ka Vaar was quite dramatic. It's now clear that Tejasswi Prakash and Rashami Desai are the new rivals on the reality show. Yesterday, Shamita Shetty started crying and the reason was Rakhi Sawant. We all know that Shamita is suffering from a frozen shoulder for a while now. Earlier, she was out of the house for a few days to get physiotherapy done. Well, till now, the actress is unable to do any tasks and she says that it's also difficult for her to do work in the house like washing utensils. Rakhi mocked how Shamita manages to curl her hair despite suffering from a frozen shoulder, but can't wash utensils. Even Salman was laughing at Rakhi's antics and Shamita didn't like that. The actress started crying and it was Nishant Bhat who consoled her. Also Read - Rakhi Sawant finds new love in 6 years younger BF Adil, compares him to Nick Jonas and Arjun Kapoor

Sense of humour? Entertainment?
This is clearly hitting below the belt, PERIOD
Stay safe, take care and see u soon @ShamitaShetty Your dignity makes you a winner already?
ThanQ #NishantBhatt @teamnishantbhat for having her back@BiggBoss @ColorsTV #ShamitaShetty #BiggBoss15 pic.twitter.com/Sa3cAfOmzr

Rajiv Adatia who is known to the Shetty family has also posted for Shamita. He has clarified that she is indeed in pain. He said he did massage her shoulders and back every night to give her some relief. Also Read - Rakhi Sawant gets a new boyfriend; gives him a kiss on a video call at the red carpet; fans say, 'Kadam kadam par pyar mil jata hai' [Watch Video] 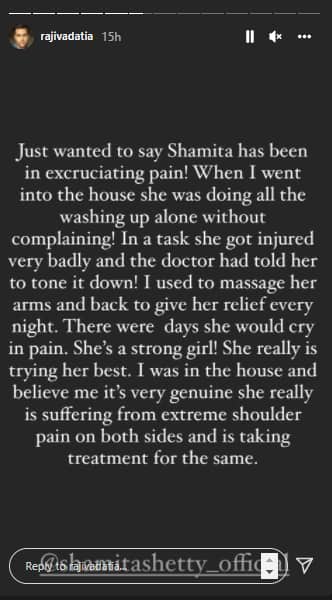 The show is now seeing the Ticket To Finale task where Rakhi Sawant is already assured for the finale. Let us see how Shamita Shetty gives it back to Rakhi Sawant in the coming days!