The current season of Bigg Boss 15 has been trending on social media. Ieshaan Sehgaal and Miesha Iyer were two contestants from whom the audience did not have much hopes. However, the two provided the necessary content to the makers after they entered into a whirlwind romance. Even the housemates were shocked. From sleeping together to cuddling up in the corners of the house and locking lips, Ieshaan Sehgaal and Miesha Iyer gave Splistvilla kind of content to the show. But many viewers found it cringe-worthy and distasteful given how inorganic it looked. But the two are surviving well on Bigg Boss 15. Also Read - Bigg Boss 15, Day 112, Live Updates: Rashami Desai and Devoleena Bhattacharjee get into a nasty fight

Incidentally, more than 80 per cent of our readers feel that Miesha Iyer is simply using Ieshaan Sehgaal on the show. Well, both of them do not have any existing fan following, to be honest. We guess that readers feel so after Umar Riaz hinted that Miesha Iyer was keen to get a connection started inside the show. People who follow reality shows see it as a standard ploy from reality show contestants. Rajiv Adatia who is friends with Ieshaan Sehgaal since years now told him that he was losing focus due to Miesha Iyer. Also Read - Bigg Boss 15: Is Rashami Desai going to leave in mid-week eviction? Worried fans hope it's not true – read tweets

Miesha Iyer is quite decent when it comes to doing tasks but connections are important as we are seeing since two to three seasons. Good solo players often do not get the time to move ahead in the game. Check out the poll results below... Also Read - Bigg Boss 15, Day 110, Live Updates: Rakhi Sawant blames Tejasswi Prakash for playing the emotional card 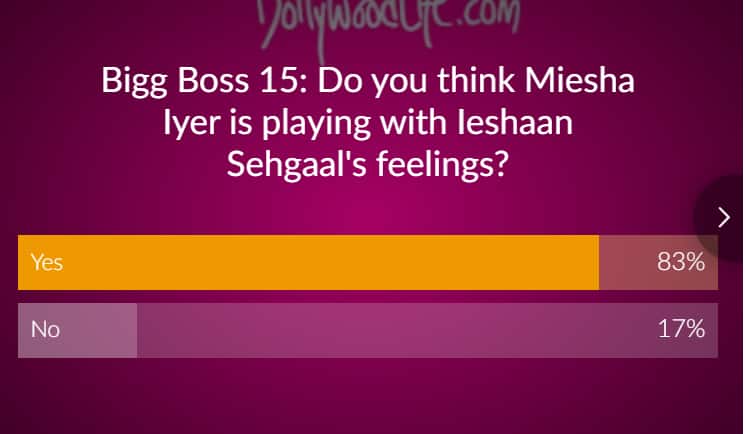