Umar Riaz has reportedly been eliminated from Bigg Boss 15. His eviction comes from the physical fight with Pratik Sehajpal a couple of days ago. Bigg Boss had warned Umar of the repercussions of his actions. Check out angry Umar Riaz fans' tweets below:

Umar Riaz has reportedly been eliminated from Bigg Boss 15. The news surfaced last night when Asim Riaz and Himanshi Khurana's tweets went viral on social media. For the unversed, Umar Riaz had been warned by Bigg Boss that the repercussions of his actions would be announced in the Weekend Ka Vaar. Umar Riaz had got into a nasty fight with Pratik Sehajpal during the torture task which was performed by Rashami Desai and Devoleena Bhattacharjee. Umar and Pratik had got into a physical fight. Though Pratik has said that he didn't mind it, Bigg Boss had shocked him with a warning. And now, his elimination reports have taken social media by storm. Netizens and Umar Riaz Army are extremely disappointed and angry with the makers. They are trending 'NO UMAR RIAZ NO BB' on social media. Also Read - Bigg Boss 15: Salman Khan jokes about Shamita Shetty’s equation with Karan Kundrra, 'Confusion ye hai ki Kundrra chahiye ya Bapat’

Fans of the show and Umar have been also trending 'PUBLIC WINNER UMAR RIAZ' on Twitter to show support to their favourite contestants while slamming the makers. Netizens have decided to abandon the show it seems. This season of Bigg Boss 15 has been very dull and boring and it was seen in the TRPs as well. And with Umar's reported eviction, fans seem to drop the idea of watching the show altogether. With Umar not being in the show, they don't want to watch it. Bigg Boss had left it on the audience to decide the fate of Umar, it seems. That's not it, Karanvir Bohra, Vikas Gupta has also expressed their shock with the same. Check out Karanvir and Vikas' tweets here: Also Read - Trending TV News Today: Ishqbaaaz's Mansi Srivastava-Kapil Tejwani's wedding festivities, Indian Idol's Pawandeep Rajan records a song for Salim Sulaiman and more 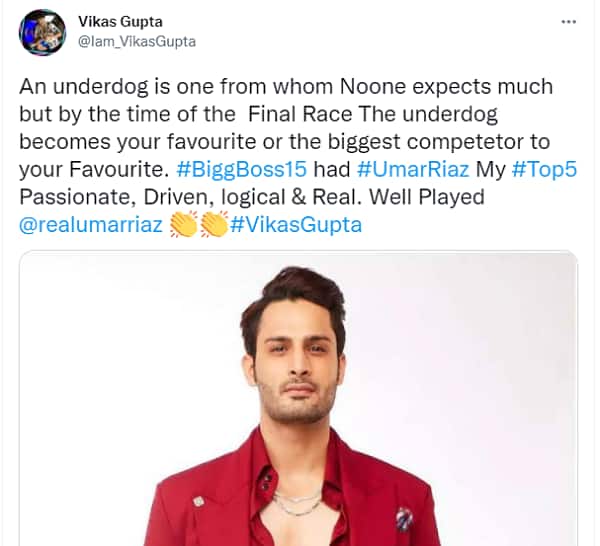 Check out the tweets of the angry fans here:

#UmarRiaz is charm of the show bb15
Bring him back.
NO UMAR RIAZ NO BB15
BOYCOTT BB15
PUBLIC STANDS BY UMAR

Actually @BiggBoss @ColorsTV you don't deserve star like UR now I'm not gonna watch your bb15 and even your next seasons. Last time this same thing you did with Jasmin bhasin and now you did with UR. So unfair man.
NO UMAR RIAZ NO BB15
PUBLIC STAND BY UMAR
PUBLIC WINNER UMAR RIAZ

Yes yrrr it's so heartbreaking ?

NO UMAR RIAZ NO BB15

In the last couple of episodes of Bigg Boss 15, we saw Umar Riaz feeling lonely. He grew close to Karan Kundrra in the house. They have been like brothers in arms. However, of late, there had been some differences between them. Umar was also close to Rashami Desai in the house.