Bigg Boss 15: Verdict's Out! Fans feel that Nishant Bhat is biased towards Pratik Sehjapal and his friends — view poll results

Bigg Boss 15: Verdict's Out! Fans feel that Nishant Bhat is pretty biased towards his friends in the house like Pratik Sehajpal view poll results

Bigg Boss 15 is turning out to be a competitive but mixed season. We are seeing a few friendships but it is obvious that people are more keen on alliances than on real bonds. The only friendship that seems to be lasting from Bigg Boss OTT is the one between Pratik Sehajpal and Nishant Bhat. The two have a lot of feelings for one another. Though they have different styles of playing Bigg Boss, the two have each other's backs. It is obvious to one and all. Nishant Bhat has always told Pratik that he is his priority in the game without any kind of hesitation. Also Read - Bigg Boss 15: Shivin Narang, Paras Chhabra, Donal Bisht - 7 names doing the rounds as wild cards for Salman Khan's show

Now, fans feel that Nishant Bhat is rather biased towards Pratik Sehajpal and his buddies on the show. Well, he has two good friends besides Pratik, which are Tejasswi Prakash and Akasa Singh. Viewers saw how he gave preference to Akasa Singh in the notes task. Karan Kundrra even went to the extent of saying that Nishant will lose friends if he carries on like this. The only thing is that he is extremely frank about being biased. You cannot accuse him of dishonesty and manipulation. Bigg Boss viewers also like loyalty and he has that quality in him. Also Read - Bigg Boss 15: Afsana Khan accuses Pratik Sehajpal and Simba Nagpal of inappropriately touching her; Karan Kundrra supports her 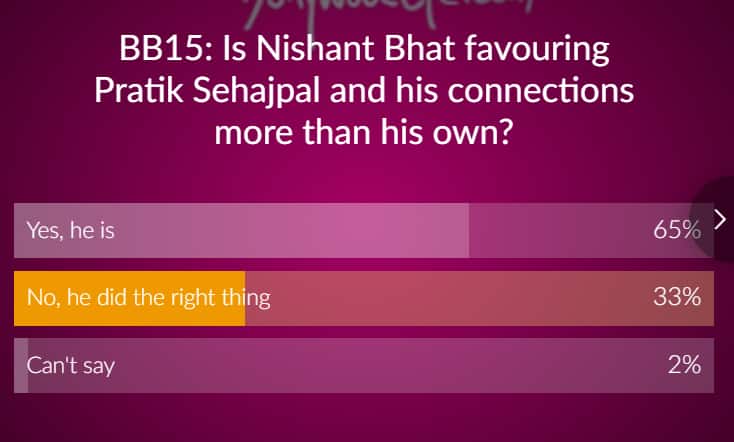