Bigg Boss 16: Karan Johar to take over hosting duties as Salman Khan's contract comes to an end? Here's what we know

Salman Khan is known to be the face of Bigg Boss 16. And it seems he will be replaced by Karan Johar now. If reports are anything to go by, Salman Khan will not host the show anymore. Bigg Boss 16 is one of the most popular TV show in the country. Salman Khan hosts the controversial reality TV show and he has been the host for the last 8 seasons now. However, it seems the Tiger 3 actor will not host Bigg Boss 16 anymore. Salman Khan has been handling tough situations and dealing with the contestants and giving them lessons on Sam Dam Dand Bhed during the Weekend Ka Vaar. And if the information by The Khabri is to go by, Karan Johar will take over the hosting duties from Salman Khan for the next weeks. Also Read - TOP TV Newsmakers of the week: Sumbul Touqeer Khan in Naagin 7, Bigg Boss 16 double eliminations, Tunisha Sharma Suicide Case updates and more

Weekend Ka Vaar of Bigg Boss 16 are fun because Salman Khan hosts them. While he might be bashed and called biased etc, one cannot deny that the superstar has been handling it quite well. As per The Khabri, Karan Johar will now host the Weekend Ka Vaar for Bigg Boss 16. In the third week of Bigg Boss 16, Karan Johar had filled in for Salman when the latter was down with Dengue. And it seems he will likely make a comeback as host after Salman. Karan Johar has been a host of Bigg Boss OTT as well. As per online buzz, Salman's contract has come to an end. Also Read - Bigg Boss 16 promo: Shiv Thakare, MC Stan and Mandali breaks down as Abdu Rozik marks his exit [WATCH]

Salman Khan is no longer the host of Bigg Boss 16?

While there is no official confirmation on the same, as per The Khabri there is indeed some consolation for the fans. Salman Khan will be returning as the host during the Finale. Well, fans would agree that the finale won't be a finale unless Salman Khan announces the winner. However, there is no confirmation on the same yet. Check out the tweets by The Khabri here: Also Read - Trending Entertainment News Today: First glimpses of Ranbir Kapoor-Alia Bhatt's daughter Raha, real reason behind Sajid Khan's Bigg Boss 16 exit and more 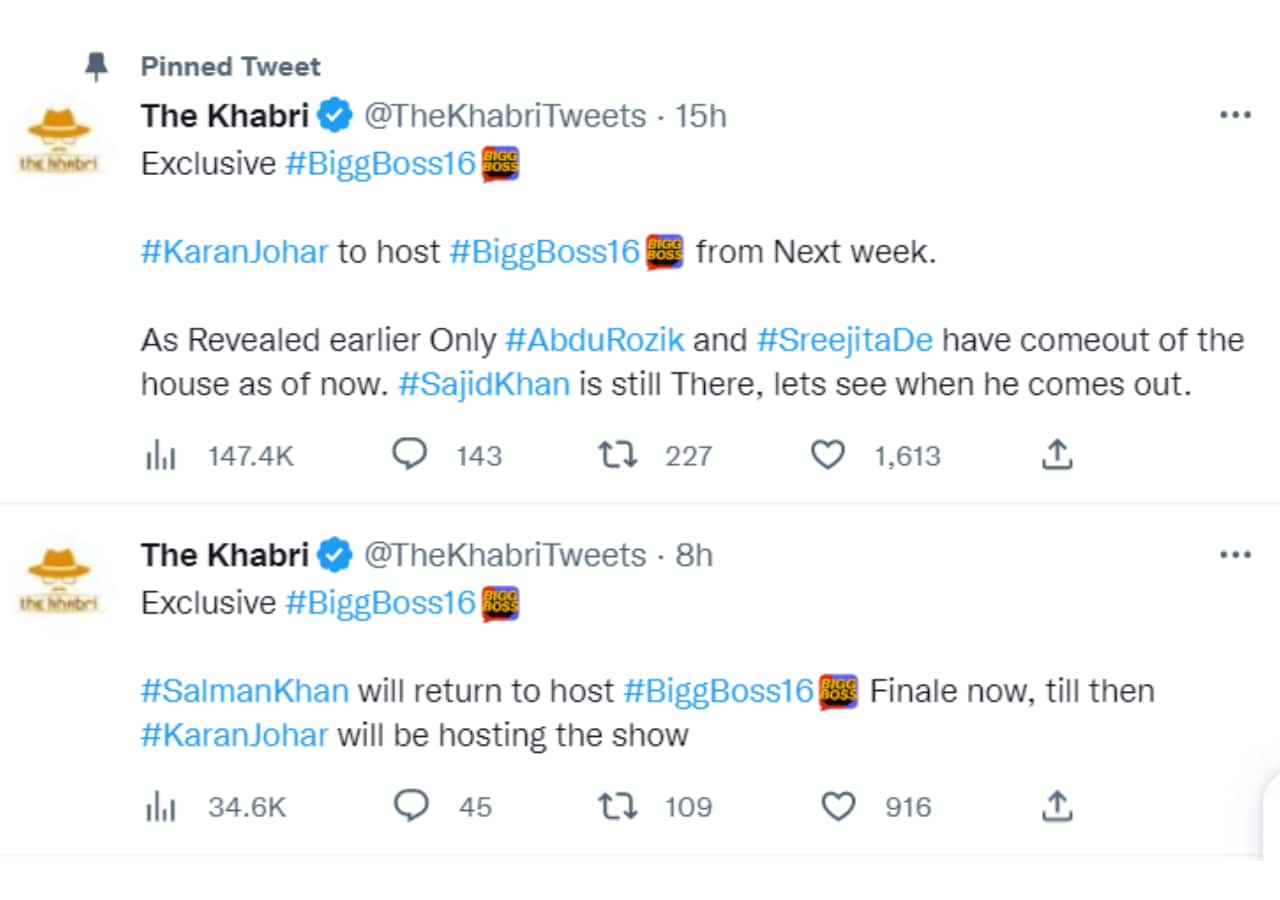 Meanwhile, in the latest episode of Bigg Boss 16, we saw Sreejita De being evicted from the house. And now, in the upcoming episode, Abdu Rozik will also leave the house. His departure will leave everyone highly emotional, especially Shiv Thakare. Abdu Rozik has become everyone's fave in the house and the country. It seems Sajid Khan is not yet out of the house.