Bigg Boss 16: Shalin Bhanot's ex-wife Dalljiet Kaur and son Jaydon wish him in the sweetest manner after he faces 'bullying' in the house

Bigg Boss 16: Shalin Bhanot's ex-wife Dalljiet Kaur and son Jaydon send him love and strength after he gets bullied by Tina Datta and Priyanka Chahar Choudhary Bigg Boss 16 contestant Shalin Bhanot is facing hard times. The whole drama happened because of his alleged fake love angle with Tina Datta. The actress broke down in last Weekend Ka Vaar saying that she has been made to look like a vamp. She revealed how Shalin Bhanot tried to contact her even before the show via his management team. They share the same publicist too. Salman Khan flayed Shalin Bhanot like he does on most Weekend Ka Vaar episodes. He told him that he needs to stay away from Tina Datta. The Uttaran actress also said that he asked her for some intimate items which she cannot reveal on the show on national TV. Also Read - Bigg Boss 16: Tina Datta to make her Telugu film debut after Salman Khan's show

Shalin Bhanot is not keeping well mentally inside the house. He even said that he felt afraid seeing the mirrors. The team has asked him to avail services of a psychiatrist if he feels so. He even asked Nimrit Kaur Ahluwalia for tips on how to deal with the negative emotions. Yesterday, Priyanka Chahar Choudhary and Tina Datta mocked him continuously. Many netizens felt it was plain bullying. Tina Datta had said that she was wrong in befriending a man like him who could not even respect his wife. Also Read - Bigg Boss 16: After Shalin Bhanot bags Ekta Kapoor's show, netizens joke about Salman Khan's show being like a 'campus placement' [Read Tweets]

Now, Dalljiet Kaur has wished her husband. She shared a pic of their son, Jaydon and her wishing him. She said there were only a few weeks to go, and he should stay strong. The actress said they struggled to be cordial just for the sake of Jaydon. Also Read - Bigg Boss 16 Poll: Sumbul Touqeer Khan, Archana Gautam or Tina Datta - Who deserves to be in the top three? VOTE NOW 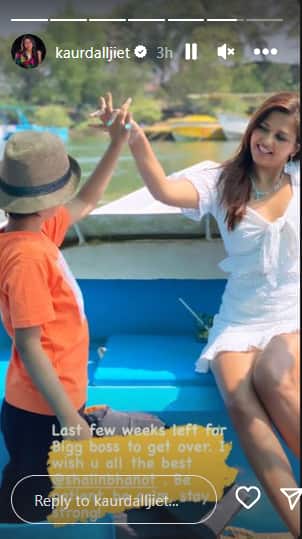 Bigg Boss 16 fans got to know yesterday that Shalin Bhanot has bagged Ekta Kapoor's new show which is a remake of Beauty And The Beast. He has replaced Kushal Tandon who chose to opt out. Many fans did not like how he spoke to Bigg Boss about his mental state in the confession room. But they emphasized after the girls mocked him last night.