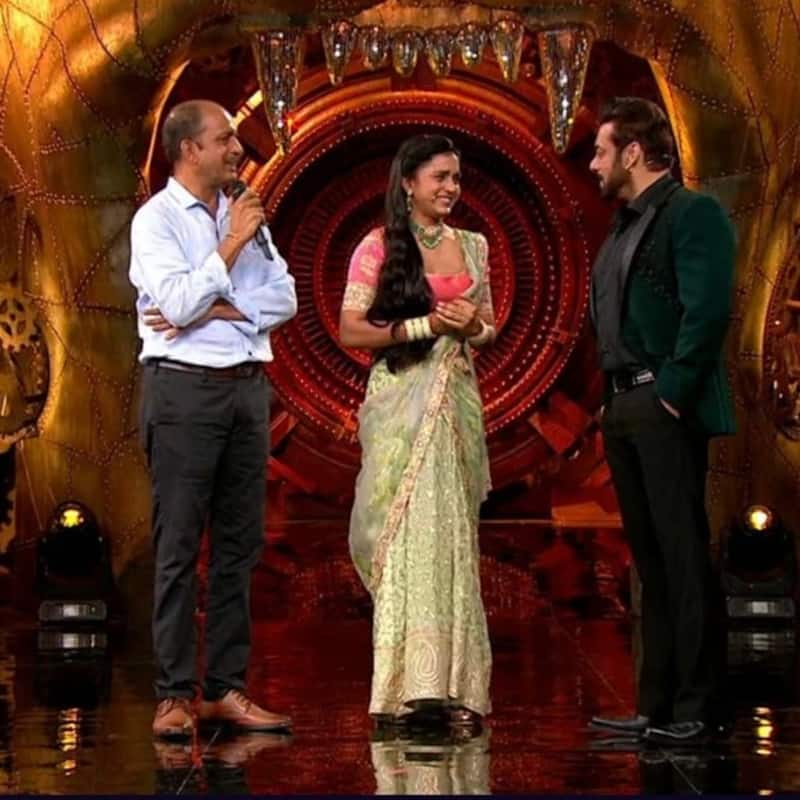 Television actress Sumbul Touqeer, who is known as TV's favourite bahu Imlie, has finally entered Salman Khan's controversial reality show Bigg Boss 16. She made a stunning entry in a sari and dance to Sara Ali Khan's Chaka Chak song from Atrangi Re with Salman on the stage. Also Read - Bigg Boss 16: Shiv Thakare talks about his relationship with ex-girlfriend Veena Jagtap; says they haven't moved on after break-up

Sumbul looked pretty confident in her approach and even brought a smile on Salman's face. Their witty and funny banter was loved by the viewers. Salman tried to pull Sumbul's leg by mispronouncing her name. She then corrected the Dabangg Khan that Sumbul goes well with Chulbul, which left Salman quite impressed. Also Read - Bigg Boss 16: Gauahar Khan slams Nimrit Kaur Ahluwalia and group; calls Bigg Boss unfair with Ankit Gupta after jail task

On stage, Sumbul was joined by her father, who recited a poem for his daughter. She talked about her struggle and how she made it here. Her father said that it was a proud and dream come true moment for their family to see Sumbul being a part of such a big stage. Also Read - Bigg Boss 16: From Shiv Thakare's girlfriend Veena Jagtap's entry to Sreejita De's comeback; exciting surprises for viewers

Viewers have already started rooting for Sumbul after her appearance. Her cuteness and honesty has made people fall in love with her all over again. Many people have already declared that Bigg Boss 16 will be Sumbul's season.

A proud moment for a father ??❤️ Salman introduces her as the youngest contestant of this season this is success ? Sumbul is looking so strong and entertaining...#SumbulTouqeerKhan #BiggBoss16 pic.twitter.com/H6Y9JvS7Kd

She is so genuine and strong at this early age

Also this girl has got some really good moves?#BiggBoss16 #BB16

Wow @TouqeerSumbul you are just 18 years old & the confidence & maturity you have is amazing.. loved the poem of your father.. With his blessings & teachings you're going long way... You will do well.. Very Proud of you.. God Bless You Dear ??#SumbulTouqeerKhan #BiggBoss16

I like #SumbulTouqeerKhan and #TinaDutta both are didn't look fake or dramatic. She is extremely talented and looks super real. She can be the tough competition to everyone in the house. And her voice is so seductive. #BB16 #BiggBoss16

I actually loved the way SK guided her knowing she's the youngest one in the house and needs a little push to go and play it well and on top of that her father's Kavita is the real motivation she needed atm ?

Sumbul had recently bid adieu to her popular TV show Imlie as it is going to take a 20-year leap. Her chemistry with her costar Fahmaan Khan was loved by all.