Bigg Boss OTT: Has Raqesh Bapat found love in Shamita Shetty? The actor wakes her up with a kiss making us go ahem, ahem!

Bigg Boss OTT: Raqesh Bapat wakes up Shamita with a kiss and we are left wondering if the first real love story of the house has started

Bigg Boss OTT has been missing the genuine romance angle. Well, it looks like Raqesh Bapat has developed an attraction for Shamita Shetty. People inside the house had been talking about it since a while but now there seems to be some visual proof. There are pictures where we can see Raqesh Bapat waking up Shamita Shetty with a good morning kiss. We can see that he is leaning on her bed dressed in a black kurta with white pyjama. Shamita Shetty extends her hand outside the blanket and he kisses her just like we see a prince kissing a princess in the fairy tales. Just check out the pic below... Also Read - Bigg Boss OTT: Moose Jattana finds Shamita Shetty and Raqesh Bapat’s connection boring; says, ‘Baat karne layak hi nahi hai’ [EXCLUSIVE] 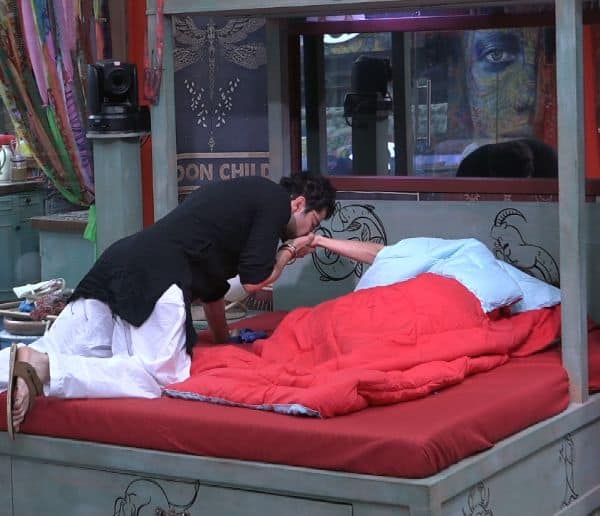 As we know, Shamita Shetty is single, and so is Raqesh Bapat. The latter got divorced from his wife, Ridhi Dogra two years back. The two continue to be the best of friends. In fact, she has been cheering for him on social media. She was one of the few who knew that he did be participating on the show along with his parents and some family members. So far, Raqesh Bapat has not done anything substantial on the show. In fact, fans have trolled him for only sitting with Shamita and bitching about others. Also Read - Bigg Boss OTT: Neha Bhasin reveals she would have dated Pratik Sehajpal if she was not married; says 'Kha jati isko main'

Raqesh Bapat is known for his artistic skills as much as his acting. He has done a number of shows on TV since a while now. The actor refused to participate on the show since many years. Let us see if we get to see more of Raqesh Bapat and Shamita Shetty romance on the show.