Bigg Boss OTT will have its grand finale tonight. We had conducted a poll to know if you all thought Divya Agarwal might win the show and the verdict is out.

Bigg Boss OTT is about to get over and today is the finale. We are left with 5 contestants – Nishant Bhat, Divya Agarwal, Raqesh Bapat, Shamita Shetty and Pratik Sehajpal. In a Sunday Ka Vaar episode, host Karan Johar openly praised Divya for reaching the finale week on her own. She was the only contestant who was without a connection. Her game has been pretty good too. She has put her point across well and stood by her opinions. She can also be fun to be with. Also Read - Trending OTT news today: Divya Agarwal hosts Bigg Boss 15's Curtain Raiser on Voot Select, HC directs Netflix to ban first episode of Crime Stories: India Detectives and more

We had conducted a poll to know if you all thought her to be the winner and the verdict is out. A whopping 77% of you all feel that she is the ideal contestant to win the trophy. Here’s a look at the results: Also Read - Ahead of Bigg Boss 15, have a dekko at 7 DIVAS who ruled the show with their sartorial choices – view pics 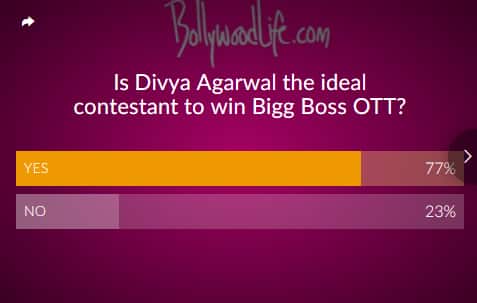 Meanwhile, in a recent episode, a journalist pointed out that Divya's comments about Neha Bhasin’s underwear were ‘misogynistic’. Earlier in the show, Divya had called it disgusting when she came to know that it belonged to Neha. To this, Divya said that it was unhygienic, and even if the underwear belonged to a man, she would've done the same thing. She also said that Shamita had issues with it. There was a heated discussion between Divya, Shamita and Neha over this.

Neha was the last contestant to be eliminated due to ‘lack of audience’ votes. Nishant is another contestant who has played the game well so far. He has also been very entertaining and has a great sense of humour.

So, are you all excited for the finale? Do let us know by tweeting to us @bollywood_life.