Going by the ongoing instances, we had conducted a poll to know if the majority of the audience feel that Shamita Shetty is dominating her fellow contestants in the Bigg Boss OTT house.

Shamita Shetty has become the centre of all attraction, though mostly negative, in the Bigg Boss OTT house. When she entered the house, she got close to Divya Agarwal and it felt that their friendship might go a long way. But things started crumbling down into pieces when Divya called Shamita 'bossy', to which the latter retorted saying, "I've done three reality shows before and this is my fourth." Also Read - Bigg Boss OTT: Neha Bhasin reveals she would have dated Pratik Sehajpal if she was not married; says 'Kha jati isko main'

Later, Shamita was also involved in a heated argument with Pratik Sehajpal who termed her as a controlling person. Akshara Singh also got into a verbal spat with Shamita over kitchen duties. Akshara reasoned that Shamita misbehaved with her first when she just asked for the salt box. Akshara then told Shamita that she just can't dominate everyone in the house and dictate what she feels is the right thing to do. Also Read - Bigg Boss 15: Mohsin Khan, Tina Dutta, Manav Gohil – 15 Celebs fans may get to see in Salman Khan's show

If that was not enough, Shamita recently picked up fight with Nishant Bhat when she was punished by Bigg Boss. Shamita started shouting and hurled abuses at Nishant without any particular reason. On the Weekend Ka Vaar with Karan Johar, Shamita admitted that her sudden outburst was because of the emotional baggage she was carrying inside her head. Also Read - Bigg Boss OTT: Shamita Shetty and Raqesh Bapat REVEAL their current 'relationship status'; the latter gives a sarcastic reply

Going by these instances, we had conducted a poll to know if the majority of the audience feel that Shamita is dominating her fellow contestants in the Bigg Boss OTT house. The poll result is finally out and 63 per cent of the viewers voted to declare Shamita as a dominating person while 37 per cent didn't feel the same way. 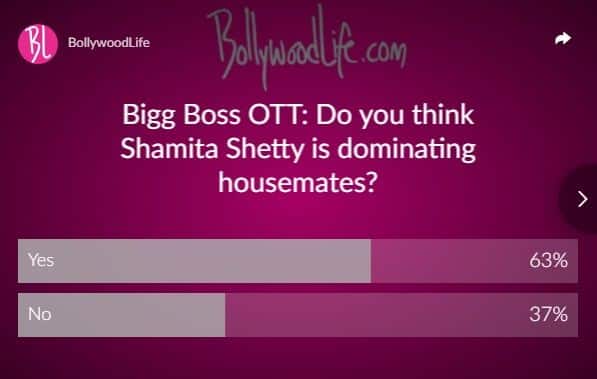 Keep watching this space for the latest updates on Bigg Boss OTT.