In Bigg Boss OTT, Moose Jattana was recently seen making fun of Shamita. However, she dragged in Shilpa Shetty and Raj Kundra too in it

Bigg Boss OTT has turned into a house of fights and arguments. Almost every hour, there is some argument taking place. Social media influencer Moose Jattana has also been having constant fights with the housemates. While many are bashing Moose for being outspoken, she has found some fans too. Now, her video has gone viral that has her talking about Shamita Shetty. Moose and Shamita cannot see eye to eye and have been constantly arguing. However, Moose seems to have crossed a line this time. Also Read - Bigg Boss OTT: Moose Jattana finds Shamita Shetty and Raqesh Bapat’s connection boring; says, ‘Baat karne layak hi nahi hai’ [EXCLUSIVE]

In the video, we see her making fun of Shamita Shetty by dragging in Shilpa Shetty. She says that she has heard that Shamita left one reality show as her sister was getting married, and now that the sister is getting divorced, Shamita has come back. She was referring to the controversy revolving around Raj Kundra and Shilpa and the pornography-related case. Many netizens have bashed Moose for her statement and called her badtameez. Watch the video below: Also Read - Bigg Boss OTT: WHAT! Did Neha Bhasin just CONFESS her love for Pratik Sehajpal? 'Being a married woman, meri thodi toh fategi na'

Here are some reactions. Also Read - Bigg Boss OTT: Neha Bhasin reveals she would have dated Pratik Sehajpal if she was not married; says 'Kha jati isko main'

Moose accused him for bad touch. But he didn't even exaggerate that thing. Moose is a low class. That girl even made fun of Shilpa shetty and her husband. #ZeeshanKhan 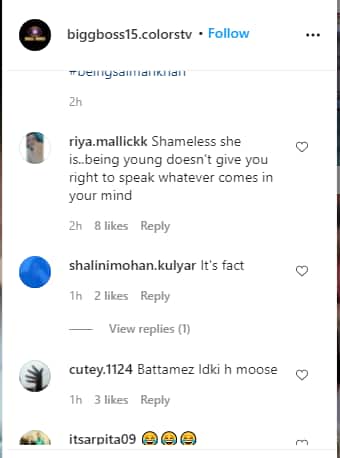 What are your thoughts on this? Tweet to us and let us know.