Bigg Boss OTT: Urfi Javed makes her first post on social media after getting eliminated; has THIS to say about her journey

Actress Urfi Javed was the first one to get eliminated from Bigg Boss OTT house. Post her eviction, she made her first post on social media talking about her journey

Bigg Boss OTT's first Weekend Ka Vaar with Karan Johar proved to be entertaining and how. The host spared no one and gave a piece of his mind to all. Meanwhile, Urfi Javed became the first one to get eliminated from the show. The actress was shown the door due to less number of votes. While many of her fans called the decision unfair and trended #BringbackUrfi on Twitter, the actress made sure to connect with her fans after she reached home. Also Read - Bigg Boss OTT winner Divya Agarwal opens up on participating in Khatron Ke Khiladi 12 [Exclusive]

She made her first post on Insta stories, thanking all her fans for giving her enormous support. She shared a photo and wrote, "Back home. Thank u for enormous support! It was short and sweet! I'm talking about my journey." She then shared a video expressing shock and surprise over how much love she received from her fans. She mentioned that she received a lot of direct messages saying that she deserved to say. Take a look at her post here. Also Read - Bigg Boss 15: Will it be Pratik Sehajpal Vs Umar Riaz on the show? Fans flood Twitter with reactions in anticipation

Meanwhile, in yesterday's Weekend Ka Vaar episode, Karan Johar slammed Divya Agarwal for her behaviour. She had once stated that she does not need to be on the show. To this, Karan Johar slammed her saying, "Tell me, Divya ma’am, you don’t need to show why you are here. Yeh Bigg Boss ka ghar hai, this is no party. You all are all playing a game, let’s get that straight." The filmmaker also lashed out at Shamita Shetty stating that he does not care about her if she does not care about the show. Also Read - Bigg Boss OTT winner Divya Agarwal OPENS UP on war of words with Karan Johar: 'If I have to get a film by impressing someone...' 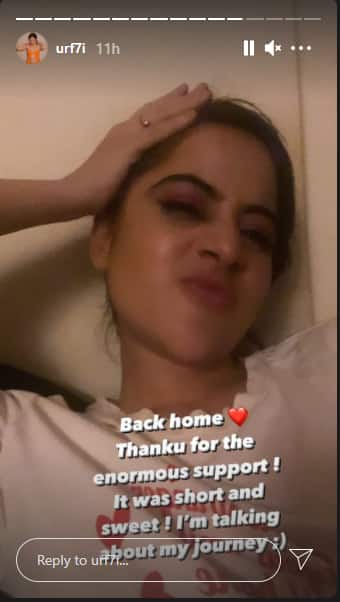