After Surbhi Chandna and Nisha Rawal, another celebrity to grab headlines for participating in Bigg Boss 15 is noted actress Bhumika Chawla. However, the actress strongly refuted the claims.

Even before Rubina Dilaik was announced as the winner of Bigg Boss 14, there were news and speculations about Bigg Boss 15. Every week, new names crop up as the possible contestant in the upcoming season of Bigg Boss. And the latest celebrity to become prey to these reports is noted film actress Bhumika Chawla. However, the actress has strongly refused to do Bigg Boss and squashed all the speculative reports in a single tweet. Bhumika Chawla tweeted out saying that she is a very private person in real life and hence her participation in Bigg Boss is not possible. Also Read - Bigg Boss 15: Divyanka Tripathi, Parth Samthaan and more celebs who are out of the race for the new season

The MCA Middle Class Abbayi actress tweeted out saying, "FAKE NEWS -No I have not been offered Big Boss -NO WONT DO IT IF OFFERED . I was offered season 1, 2 ,3 &later some time again &refused to do all .I haven’t been offered this time & I still won’t do it . I’m a public personality -but Am very private to have cameras on me 24/7." Bhumika has worked with Salman Khan in Tere Naam. Have a dekko at her tweet here: Also Read - Bigg Boss 15: Sushant Singh Rajput's ex-girlfriend Rhea Chakraborty to participate in Salman Khan's reality show? Read deets 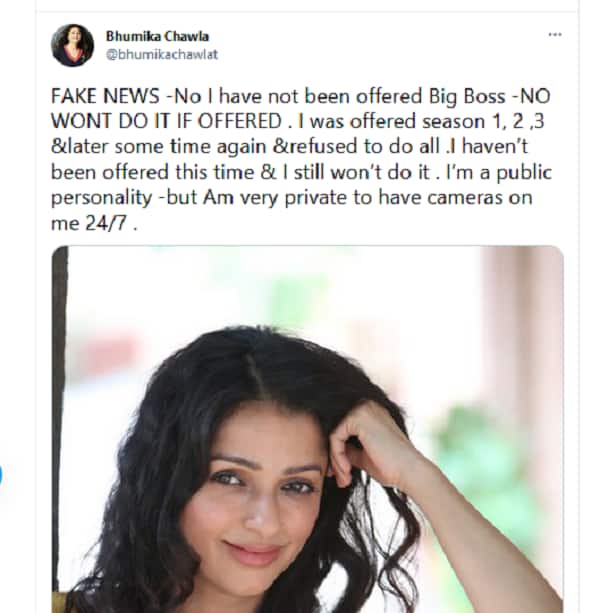 FAKE NEWS -No I have not been offered Big Boss -NO WONT DO IT IF OFFERED . I was offered season 1, 2 ,3 &later some time again &refused to do all .I haven’t been offered this time & I still won’t do it . I’m a public personality -but Am very private to have cameras on me 24/7 . pic.twitter.com/xemG2HJYFu

Bhumika Chawla, on the work front, has Seeti Maar alongside Tamannaah, Digangana Suryavanshi, Gopichand, Rahman, Krishna Murali Posani, Ramesh Rao to name a few. She will also be seen in Kannai Nambathey alongside Udhayanidhi Stalin, Aathmika and Sathish.

Meanwhile, for those not in the know, this year, the Bigg Boss house will be open again for commoners. It would be interesting to see what drama unfolds. It's almost time for the new season of Bigg Boss and we are sure a lot of fans of the show are eagerly waiting to get the latest update on the contestant's list and more.

The Hindi entertainment industry has been having a lot of controversies this time around. And hence, several trolls were picking out celebs who grabbed headlines as the new possible contestants. Just last week, former Yeh Rishta Kya Kehlata Hai actor Karan Mehra and his wife Nisha Rawal grabbed headlines for their ugly spat. The actress accused Karan of domestic violence and having extramarital affair. On the other hand, Karan denied the same claiming that it is all a baseless and fabricated lie. Fans picked on Nisha saying that she would be the next Bigg Boss 15 contestant. Naagin 5's Surbhi Chandna had also been approached for the show stated reports. However, the actress denied participation in an Ask Me Anything session on Instagram and put an end to all speculative reports.