VJ Anusha Dandekar and Karan Kundrra were love professors on the show Love School. Unfortunately, their love could not last forever.

VJ Anusha Dandekar and actor Karan Kundrra were once the IT couple of Telly land. They were considered to be a power couple, so much that they were the love professors on a show called Love School. However, destiny had something else planned and they parted ways leaving their fans shattered. Post the split, Anusha had hinted at being cheated in one of her posts. Now, she has revealed the 'direct reason'. Also Read - Bigg Boss OTT: Raqesh Bapat opens up on his bond with Shamita Shetty post the show; says, ‘Want to know her better’ [EXCLUSIVE]

On her Insta stories, she carried an 'Ask me anything' session and a fan asked her about the reason of their break. Sharing a picture with her dog, Anusha Dandekar stated that she deserved more honesty, love and happiness. And that she chose herself over other. She wrote, "We deserve more honesty, love, and happiness. And it starts with self-love. So I chose myself. That's it." Also Read - Bigg Boss OTT winner Divya Agarwal opens up on participating in Khatron Ke Khiladi 12 [Exclusive] 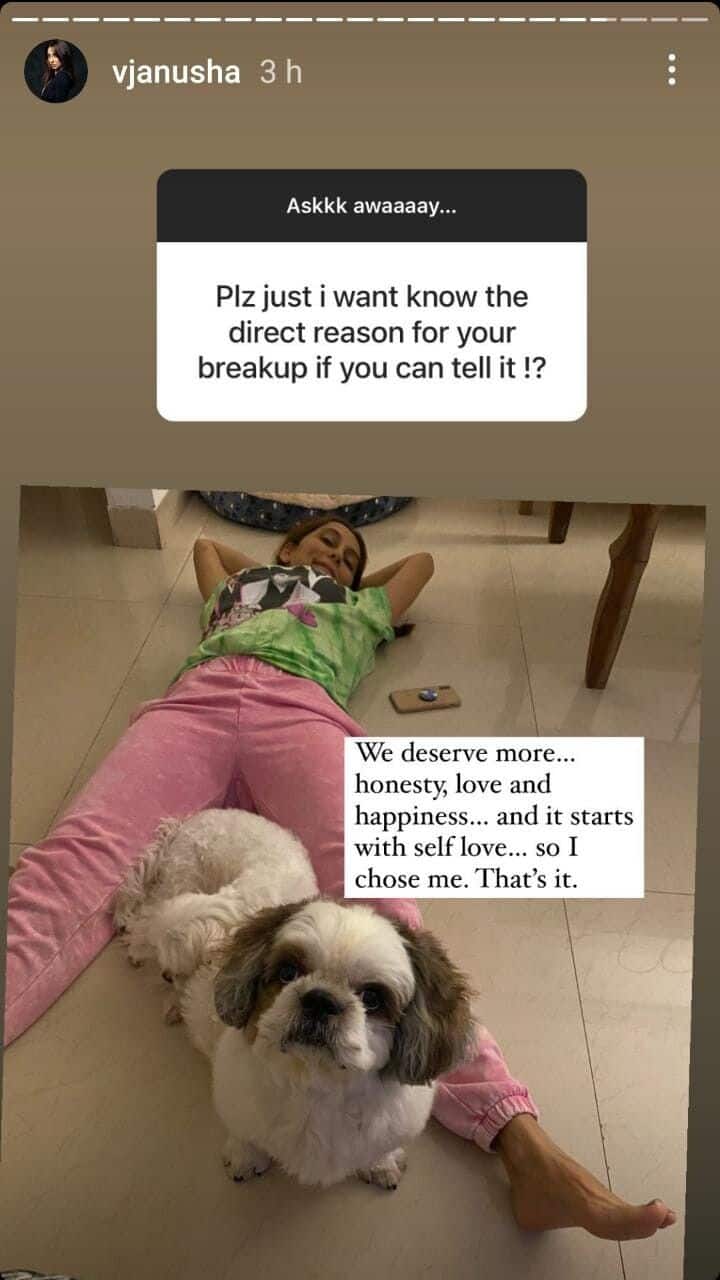 Earlier, as she opened up about the split, Anusha had written, ""So here it is, before the year ends...Yes I did a show called Love School, yes I was your Love Professor, yes everything I shared and the advice I gave has always been real and from my heart... yes I love hard, so hard... yes I don’t leave till there is nothing left for me to try and fight for, yes even I’m human, yes even I lost myself and some of my self-respect, yes I’ve been cheated and lied to... yes I waited for an apology, which never came, yes I learnt I actually had to apologise and forgive myself... And yes I grew, have grown and will continue to grow from all of it and look at the positive (sic)."

Post, Karan Kundrra, Anusha Dandekar was reportedly dating Jason Shah. However, Jason sparked rumours of their split by deleting all their pictures together from social media.

On the other hand, Karan Kundrra is said to be entering Bigg Boss 15. While there is no confirmation as such, a promo video of the show features someone like him as a contestant hinting that Karan is indeed a part of the controversial show.