Popular TV hunk and the winner of Bigg Boss 13, Sidharth Shukla celebrated his 40th birthday on December 12. While we saw Shehnaaz Gill sharing a birthday wish through a cute video, her brother Shehbaz won our hearts as gave a customized gym fondant cake to the handsome hunk on his birthday as he is a fitness freak. Sidharth Shukla shared the picture of a cake on his insta-story and wrote, "THANK YOU MERE BHAI @BADESHEHBAZ." Also Read - Trending TV News Today: Bigg Boss 15's Karan Kundrra-Tejasswi Prakash's viral video, Hina Khan and Kapil Sharma's shocking revelation and more 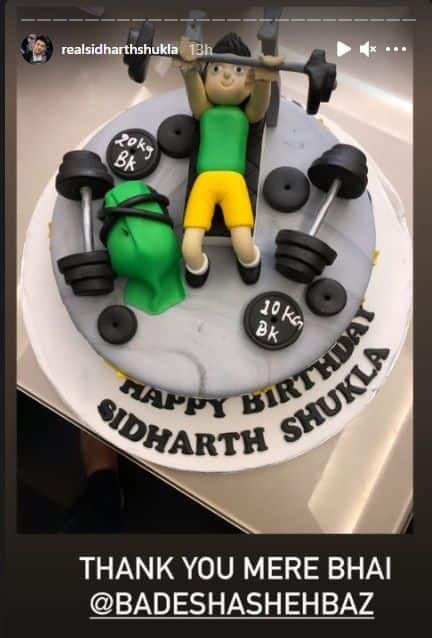 Also Read - 'Shehnaaz Gill will take time to recover, I wish she fulfills all those dreams Sidharth Shukla saw for her,' says Devoleena Bhattacharjee

While fans want Sidharth Shukla and Shehnaaz Gill to come together, father Santokh Singh has a neutral feelings for them. In the last month while talking to E Times, Shehnaaz's father Santokh revealed that she has decreased her phone calls to him post her stint in Mujhse Shaadi Karoge as he said, "I don't know why her calls to me started decreasing, even though she kept in touch with her mother. She hasn't met her grandparents after her stints in 'Bigg Boss 13' and 'Mujhse Shaadi Karoge'." He also went on to add, that she didn't even wished him this year on Diwali and didn't even had a conversation, when he was accused of rape.'She hasn't wished me 'Happy Diwali' yet this year. I always motivated her in every decision she took. I don't have any answer to why she's behaving like this. When I was accused. Shehnaz of course knew I was not guilty but it was only my son Shehbaz who had come home then," said Santokh Singh. Also Read - Trending TV News Today: Bigg Boss 15 confirmed contestants, Mohsin Khan-Shivangi Joshi's last shoot day in Yeh Rishta Kya Kehlata Hai and more